One of the mean measures of global climate change is sea surface temperatures. While you can measure it by collecting a bucket of water and putting a thermometer in it, we now have more sophisticated methods for measuring temperatures around the globe.

Beginning in the 1980s, satellites changed the entire picture for global monitoring. With their ability to measure the entire globe every day, they give us a highly detailed picture of the changing climate. But to do this, they need to be able to measure temperatures very accurately.

It turns out that to make these accurate measurements, satellites need some help from caves. 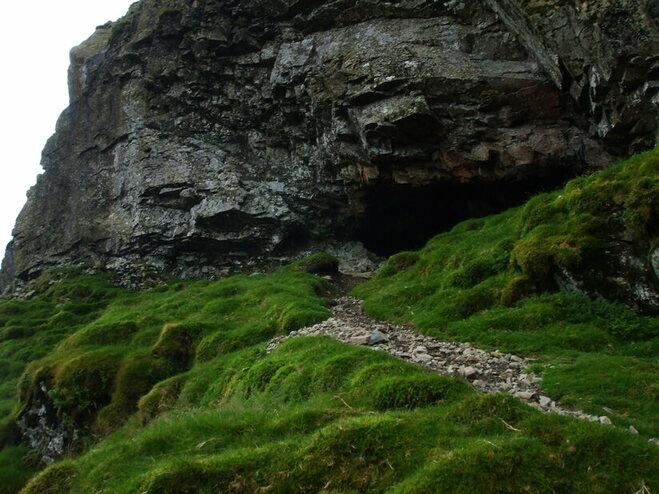 A cave, not on a satellite.

If you want to measure temperatures from space, you can't use a traditional thermometer, instead you have to look at the amount of energy the Earth emits as light. In the same way a blacksmith can heat up metal until it glows, everything around us is also glowing, just much less. For things at about room temperature, this glow is mostly infra-red. 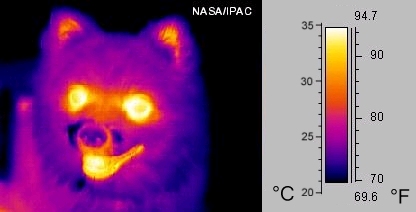 The best example of a infra-red/thermal image I could find on wikipedia.

The amount of energy emitted by an object as infra-red light depends strongly on its temperature. Very hot objects (like the sun), emit mostly visible light and very cold objects (like the cosmic microwave background) emit microwaves. The Earth is in-between, at about 20°C, it emits mostly infra-red light. The amount of light it emits also depends on its temperature, with hot objects emitting more. The Planck emission tells us how much light (and at what wavelength) the light is being emitted. 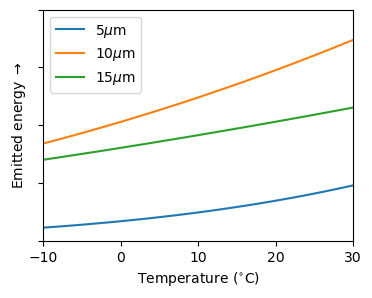 Planck emission for a variety of temperatures. At a specific wavelength, a hot object emits more light. If you can measure how much light an object emits, this tells you its temperature.

So to measure the temperature of a point on the Earth, we can measure how much infra-red light it emits.

So your satellite has measured some infra-red light, and from the amount you measured, we know we are looking at the ocean at a lovely warm 20°C? Maybe.

Maybe someone used some ethanol to clean the inside of the satellite and when you got into space, some of it evaporated and then got stuck on your mirror. Maybe it didn't. How can you tell? [1] 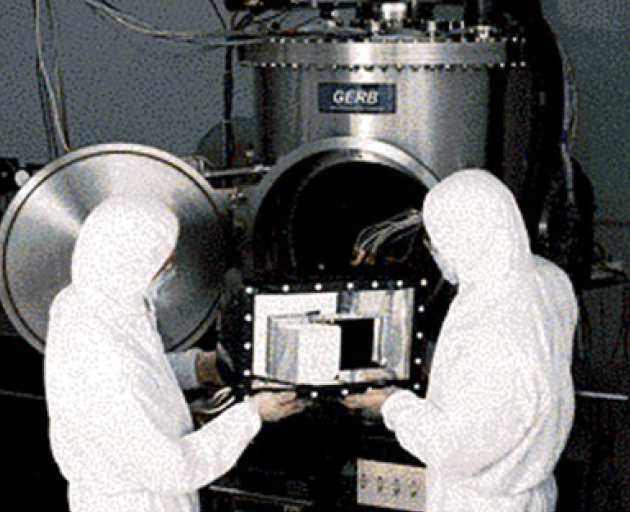 The secret is to add a way of calibrating your satellite while it is in space. As we know an object emits infra-red light based on how hot it is, we can just send up an object where we know the temperature and so how much light it emits. We compare this to what our satellite claims it sees and adjust the results to make sure when our satellite says the ocean is 20°C, it really is 20°C [2].

The difficult part is that this object has to be black, really black.

All objects are emitting light based on their temperature, but they also reflect light (that is how we see them). The total amount of light coming from an object is the combination of reflected and emitted light. To get an accurate measure of just the emitted light, we need to make sure that the object doesn't reflect any light - it has to be perfectly black.

A object like this is known as a 'blackbody'. I have no idea why. 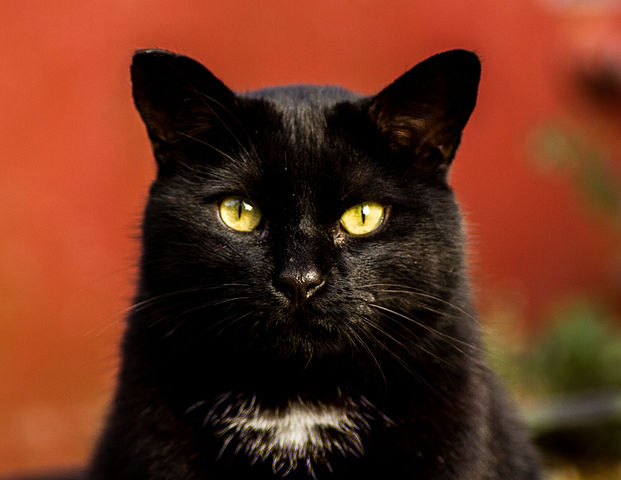 A black cat, not nearly black enough - it is reflecting too much light (wikimedia/MichaelPalmer)

We could just get something and paint it black. However, even the blackest substances still reflect a few percent of the light shining on them. We need to do better than that. For our satellite calibration, we need to reflect less than 0.1% [3].

It turns out we can learn how to do this from nature, specifically caves (as you might have guessed from the title) 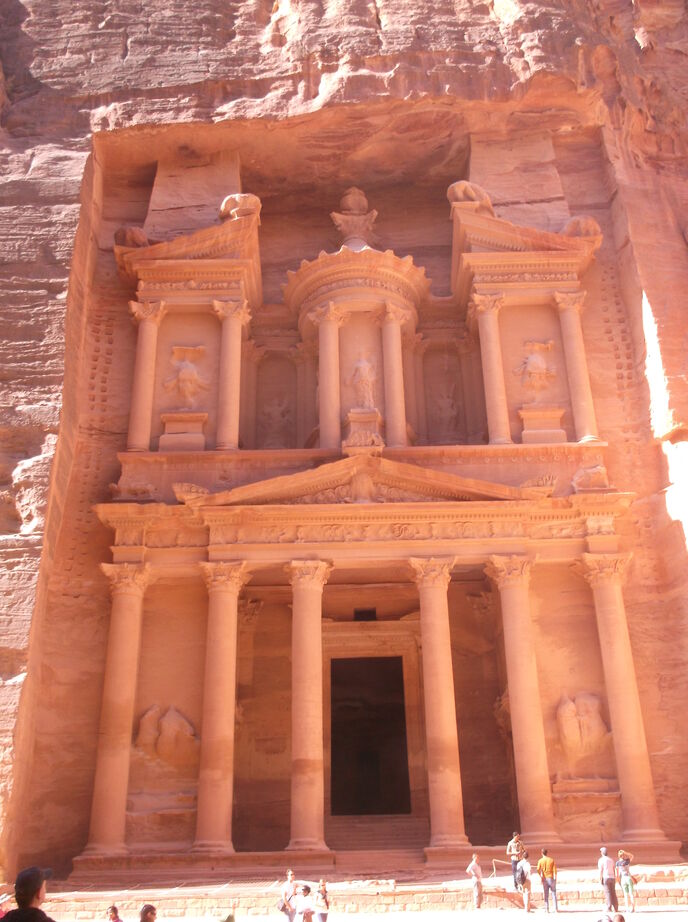 A cave (technically), also not on a satellite.

Here is the location of the Holy Grail [4]. Although the doorway looks black, the room inside actually has red walls, like the rest of the rock. So why does it look black? [5]

When light shines in the entrance, it hits one of the walls. Some of the light gets absorbed by the cave wall - it is not a perfect mirror after all. The rest of it get reflected, but probably not out the cave entrance, most of the reflected light hits another wall of the cave. Again, some of this light gets absorbed and the remainder gets reflected again. And again. And again. 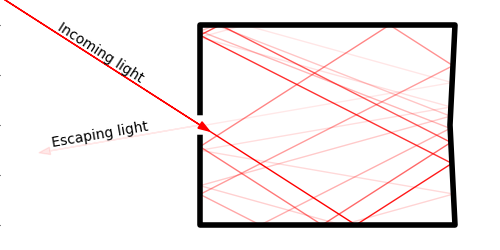 Light reflecting around inside a cave. Some light makes it back out, but only because this cave has very shiny walls, reflecting 90% of the light that hits them [6].

Some of the light eventually makes it back out the cave entrance. However, the light has been bouncing around in there for a long time, losing a bit energy each time. With a large number of bounces, the amount of light that escapes is very small. As the cave reflects almost no light, it is almost perfectly black - this makes it an ideal blackbody. The only light that comes out of the cave is emitted by the walls and depends only on their temperature - perfect for calibrating a satellite.

Many satellites use this cave principle for calibration while in space. They don't carry an entire rocky cave (obviously), but they carry a little model of a cave to calibrate themselves, with highly absorbing surfaces on the inside [7]. 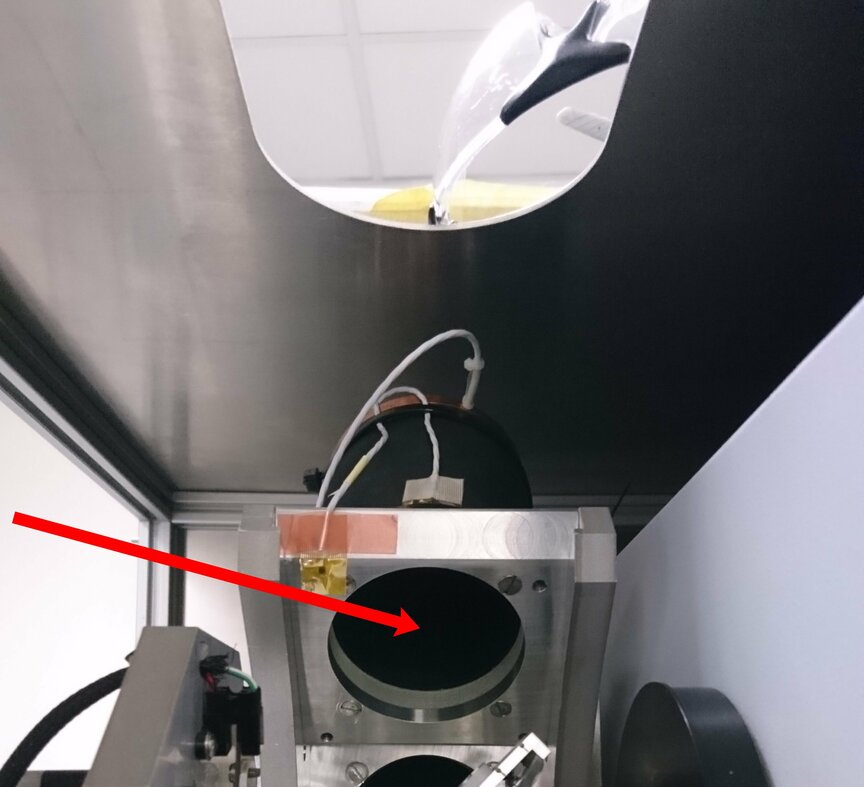 One of the blackbodies on the Finesse instrument (not actually one that goes in a satellite). The black cup is about 5cm across and has a much larger entrance than our model above. The insides are painted with a specialised, super-black paint.

These advanced black bodies can achieve a very high accuracy, for the ATSR series of instruments, the calibration source produces an error of less than 0.1°C. 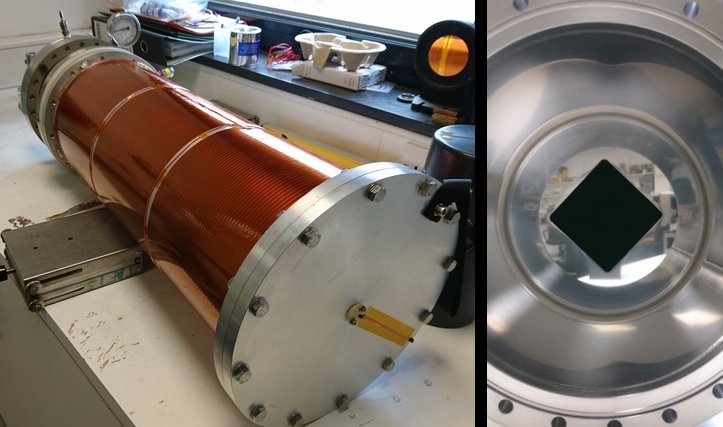 The blackbody used to calibrate the GERB instrument at Imperial College before launch (it is about 1m long and 20cm across). The right hand panel shows a view inside, not much to see in there! [8]

Not only does an accurate calibration help measuring sea surface temperature, it is critical for measuring all sorts of properties of the Earth system. Global measurements of heights of clouds, the amount of water vapour, and the concentration of CO2 all use infra-red light from satellites.

Despite depending on such a simple principle, it is only by using little model caves as black bodies that our satellite measurements are accurate enough to do all these useful things and to monitor human impacts on the climate.