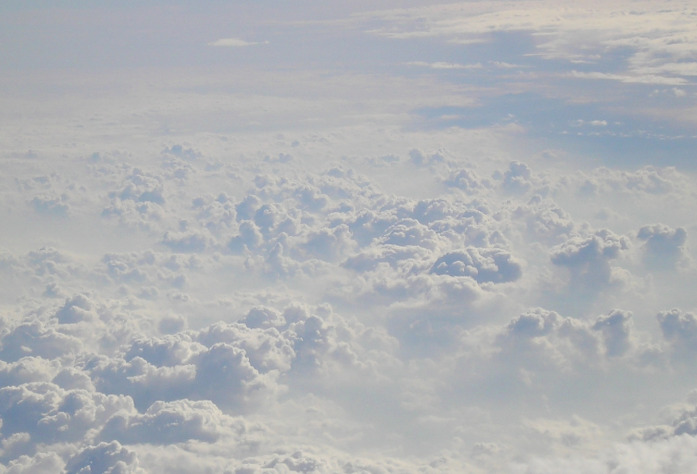 Clouds over Spain. One of my holiday snaps.

One of my favourite things to do on a plane or train trip is to watch the clouds out the window (granted, not great for my productivity). There's always so much going on, from little cumulus bubbles, to the combed hair of cirrus clouds and the awesome cumulonimbus towers.

But they don't just look nice. Clouds are a combination of complex processes in the atmosphere and play a central role in our weather and climate.

One of the most striking things when viewing the Earth from space is how much of it is cloudy. At any one time, about two thirds of the Earth is covered by cloud. Obviously this cloud is not evenly distributed (eg. it's not always cloudy in the UK - despite what it might feel like) and it is also constantly changing. This can make it a difficult task. Determining where clouds form, what their properties are and how they change is vital for understanding the Earth's climate.

A composite image of the global from the MODIS instrument. Those white bits are clouds (well, almost all of them). Image from NASA Worldview.

Clouds affect both sides of this balance. They are white, which means they reflect a lot of sunlight away from the Earth, keeping it cool. They also act like a blanket, keeping the Earth warm (think of how cold it gets on a clear night!). Small changes in the amount or properties of clouds can have large impacts in how good clouds are at reflecting sunlight and acting as blankets, which then leads to changes in the temperature of the Earth. 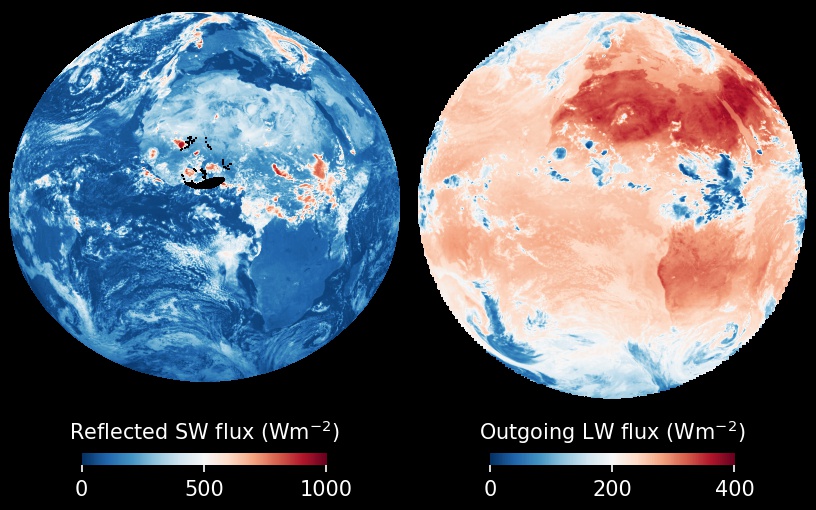 The energy from the sun reflected by the Earth (left) and the emitted infra-red energy (right), measured by the GERB instrument. Red areas in both images are were more energy leaves the Earth, blue less. Clouds are clearly visible, but have different impacts for visible light (SW; left) and infra-red (LW; right).

Human activity changes clouds. We create small particles (known as aerosols), which can change the properties of clouds. Clouds also change in response to the heating of the Earth by greenhouse gases, which further warms the Earth.

How clouds respond to human activity and our changing climate leads to some of the biggest uncertainties in understanding global warming and climate change.

Clouds across the solar system¶

Clouds are not just important for Earth, they exist on almost [1] every planet and several moons in the solar system. These clouds often look different from those on Earth, from towering clouds of ammonia on Jupiter to the thin water-ice clouds on Mars and the methane clouds poking through the haze on Titan. Planets around other stars may have even stranger clouds, perhaps made from metal oxides (like rust). 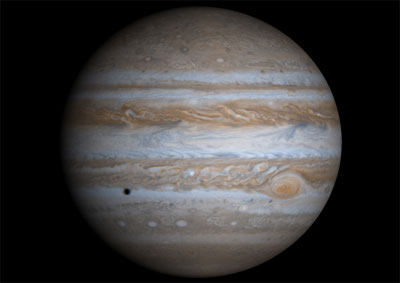 Jupiter - it has lots of clouds!

Our study of these clouds is limited by the instruments available. The instruments on interplanetary probes are typically similar to those observing the Earth, but older. The most advanced instruments facing Earth take decades to make an interplanetary voyage and clouds on other planets are rarely (if ever) measured directly (unlike on Earth, where we can fly an aircraft through a cloud to measure it). While a lack of data means that we don't understand those clouds as well as clouds on Earth, they are based on similar processes. This means that learning about clouds on Earth helps us understand other planets, even ones outside the solar system.

Why is the response of clouds to human activity uncertain? Couldn't we just go and measure them, or create them in a lab?

As always, it is not quite that simple - measuring clouds is surprisingly difficult! The most accurate way is to measure the cloud directly, either by flying an aeroplane through them or using a really tall tower. Although they are accurate, they only measure a small part of a single cloud, at a single moment in time. To get a global picture of how clouds behave, you need to use satellites. Although they view a large region, satellites can only easily observe the tops of clouds. Although we can work of some of the internal structure of clouds using satellites, it is not easy. 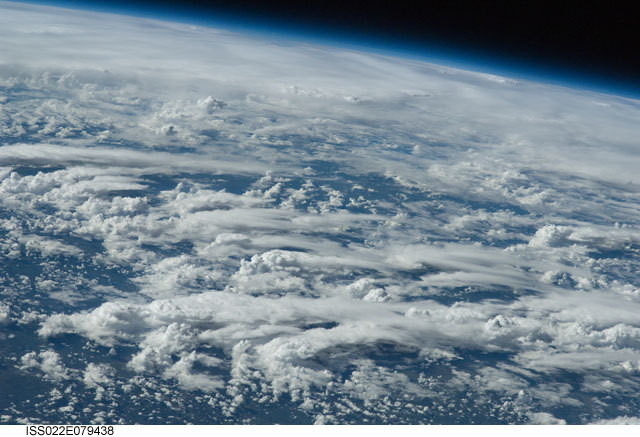 Thunderstorms over Africa, taken during ISS022. Image courtesy of the Johnson Space Center. What is going on inside these clouds?

So why not simulate clouds instead? We know the physical processes that control cloud droplet formation (as we can measure these in a lab). The problem here is that the numbers quickly get out of control. A small cloud (only 1km across) contains around 1017 droplets (100,000,000,000,000,000 [2]). This is almost twenty million droplets for every person on Earth, or a million times as many stars in our galaxy! Just storing the location of all of these droplets requires almost a thousand times as much memory as available on the most powerful current supercomputers [3]. Requiring such a large computer to simulate all the droplets in even a small cloud means that simulating clouds at this level of detail will remain impossible for a long time.

To get around this issue, computers cut clouds up into chunks and simulate those instead. This means we have to develop equations (known as parametrisations) to represent how these chunks of cloud behave. These equations are quite uncertain, partly as these chunks can be quite large (sometimes containing many clouds, in a region 100s of km across). Even if the behaviour of individual cloud particles was well understood (which is not always the case, especially when ice crystals are involved), predicting the behaviour of a whole field of clouds is a much harder problem. This is part of the reason why the impact of clouds on the climate remains uncertain.

Cloud science is not only about the behaviour of water droplets and ice crystals, it touches on many areas of science. This includes the more obvious (fluid dynamics, thermodynamics, electromagnetism) and the less obvious (biology, chemistry, engineering). The chance to combine these different areas to understand an important part of the Earth system is part of what makes studying clouds so interesting (and fun!).

Clouds are also a common feature in art and literature, famously subjects of Wordsworth and Constable, as well as several 'Cloud Atlas' books (some about clouds, and some not). Some of their observations can even lead to new insights into cloud processes [4]!

From being able to explain why polluted clouds are whiter and why contrails last such a long time to making your own short range weather forecasts, a little knowledge about clouds can make the world a more interesting place. This website is a place to learn about how clouds work and how they interact with the rest of the Earth system. I hope you have as much fun learning about them as I do!

Please feel free to contact me with questions - details on the about page.