By Edward Gryspeerdt
- Mon 10 May 2021
Link to paper: Observing the timescales of aerosol-cloud interactions in snapshot satellite images

Humans actually do this quite often, as aerosols are produced when burning fossil fuels (among other activities). Although this is unintentional, we can use this inadvertent cloud modification as a 'natural experiment' into how clouds behave - allowing us to investigate how quickly clouds respond to changes.

Sideview of a cumulonimbus cloud. Making a cloud like this out of nothing is hard, but aerosol pollution can make small changes to its properties

What does a polluted cloud look like? You might think that a polluted cloud is darker than a clean cloud - after all, smoke from fires is usually pretty dark. It turns out that the opposite is true!

Almost all cloud droplets form on an aerosol particle (e.g. desert dust, sea salt, small droplets of sulphuric acid), so a polluted cloud has more droplets. If the cloud has the same amount of water in it, those droplets are smaller on average (as you share the water out over more droplets). This polluted cloud with lots of smaller droplets is more reflective than an equivalent clean cloud [2].

In a polluted environment, clouds have more, but smaller droplets, which makes polluted clouds whiter and more reflective!

On the other hand, most clouds don't rain. If they are not raining already, adding more aerosol can't make then rain any less! These clouds disappear by evaporating as dry air gets mixed into them. Smaller droplets can make this happen faster, reducing the amount of water in the cloud and making it drier than average. Working out which process is more important is difficult, as no two clouds are exactly alike and aerosols make only small changes to clouds.

Studying clouds 'in the wild'¶

The best way to test how clouds respond to aerosol would be to run an experiment under controlled conditions in a lab. Unfortunately clouds are a bit big to fit into most labs, so we prefer to study them 'in the wild'. Luckily, we can use ships as a kind of 'natural experiment' into how clouds react to aerosol [3]. 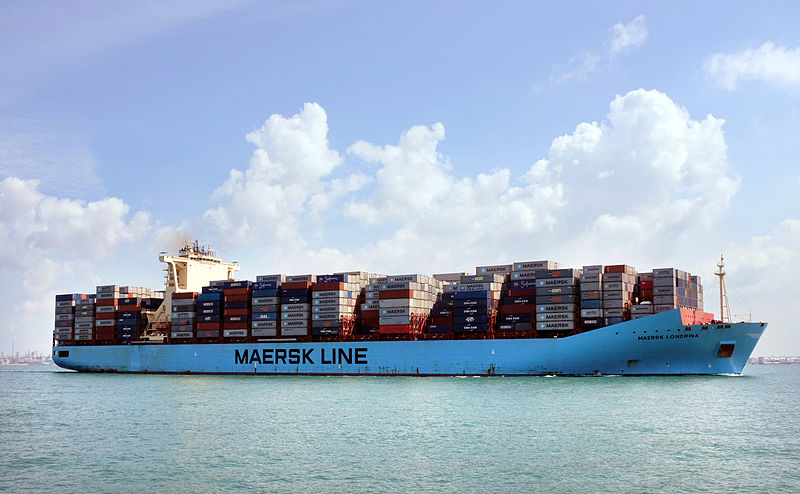 Some of these ships are really, really big. This is the Maersk Londrina, which at 200m long is pretty big. The largest container ships are more than twice a long and twice as wide! (Wikimedia Commons)

Ships burn a particularly dirty fuel, which can have quite a bit of sulphur in it [4]. When the ship burns this fuel, it creates large quantities of aerosol, which modifies clouds, leaving a trail behind the ship, known as a ship track. This trail records the impact of the ship aerosols on the cloud. We can use the distance of a point on the ship track from the ship to work out the time since the aerosols were emitted and measure how quickly the clouds respond!

This is kind of like a stopwatch for a cloud, we start the stopwatch as the ship sails underneath the cloud, and measure the cloud using satellites a bit later to see how it changed. 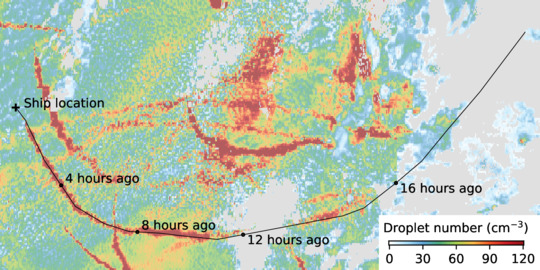 The droplet number concentration in a ship track as retrieved by the MODIS instrument. Using the ship location and the wind field, the time since the aerosol emission can be calculated for each point on the ship track (the black line).

So how quickly do clouds respond? It turns out that if you add aerosol to a cloud, you increase the number of droplets very quickly. For a ship track, we see this increase in about an hour, which is roughly the time it takes for the aerosol to get from the ship to the cloud. Over time, the extra droplets gradually mix away and the impact of the ship on the cloud disappears from our satellite images. 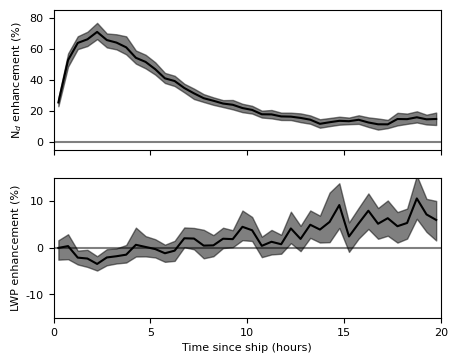 The response of clouds in a shiptrack. The top plot shows how droplet number concentration (\(N_d\)) increases quickly then gradually decreases. Changes in the amount of water in the cloud (LWP) are much slower, taking several hours to become visible.

The amount of water in the cloud takes much longer to change. Although there is a small change first visible a few hours after the aerosol first reaches the cloud, the big changes only come several hours later. Why are the timescales so different? It is because the time for a change to become visible depends on the processes involved.

The number of droplets in a cloud depends on the number of aerosol particles you have. If you add more aerosol, you get more droplets. The timescale for this change is mostly just how long it takes to get the aerosol from the ship to the cloud (about an hour).

To change the amount of water in the cloud takes time. If you stop the cloud raining, it takes time for the water to increase to a level where we can see it with a satellite. We can get an idea of how long this takes by looking at the changes in cloud water for clouds that were already polluted (had lots of cloud droplets) before the ship arrived. 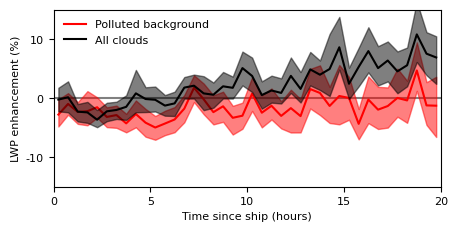 The response of clouds in a shiptrack. The top plot shows how droplet number concentration (\(N_d\)) increases quickly then gradually decreases. Changes in the amount of water in the cloud (LWP) are much slower, taking several hours to become visible.

For the polluted clouds, they are unlikely to be raining anyway, so adding more aerosol doesn't change that. For the clouds that were clean to start with, adding aerosol can prevent the cloud raining by making the droplets smaller. It takes about two hours for the difference between the clean and polluted clouds to become visible - this is about how long it takes for rain to change the amount of water in a cloud!

The drying process is slower - we start to see changes about four hours after the ship passes the cloud. For studying this process in future, we need to look at older ship tracks [5].

How quickly can you change a cloud?¶

So what is the answer? Putting togther all our results, we can build a little timeline of what happens to a cloud. While some changes happen very quickly, some effects take much longer to appear. It really depends on what about the cloud you want to change!

The stopwatch starts as the ship sails below a cloud. The initial changes to the cloud happen very quickly (within an hour), but some of the more complex effects are still developing many hours later

If you found this interesting and would like some more details, have a look at this paper (free to read), where we go into this in more detail.

Thanks to Tom Goren (Universität Leipzig) and Tristan Smith (UCL Energy Institute), who worked with me on this research

Bonus - too clean for clouds?¶

If cloud droplets form on an aerosol particle, does it ever get clean enough that there are too few aerosol particles to form a cloud? It appears yes! One thing we can do with ships is to follow the aerosol they emit and see if clouds form in otherwise cloudless skies.

There is a strong increase in the average cloud fraction (CF) near the start of the shiptrack. Looking at all tracks together disguises that the increase comes from a dramatic change in a small number of cases.

It seems that this happens quite rarely - in only 2% of cases we looked at. As we could only investigate a small region of the globe, we don't yet know if this will be important in other regions too, but we plan to find out!