A lot of places in the world are cloudy, but which is the cloudiest? Tórshavn, in the Faroe Islands, is commonly claimed as such - but even when you just look at weather stations, there are already place that are cloudier. Chuuk Lagoon, in the Caroline Islands, has over 92% cloud cover. But by looking only at weather stations, we only checked a small fraction of locations around the world. 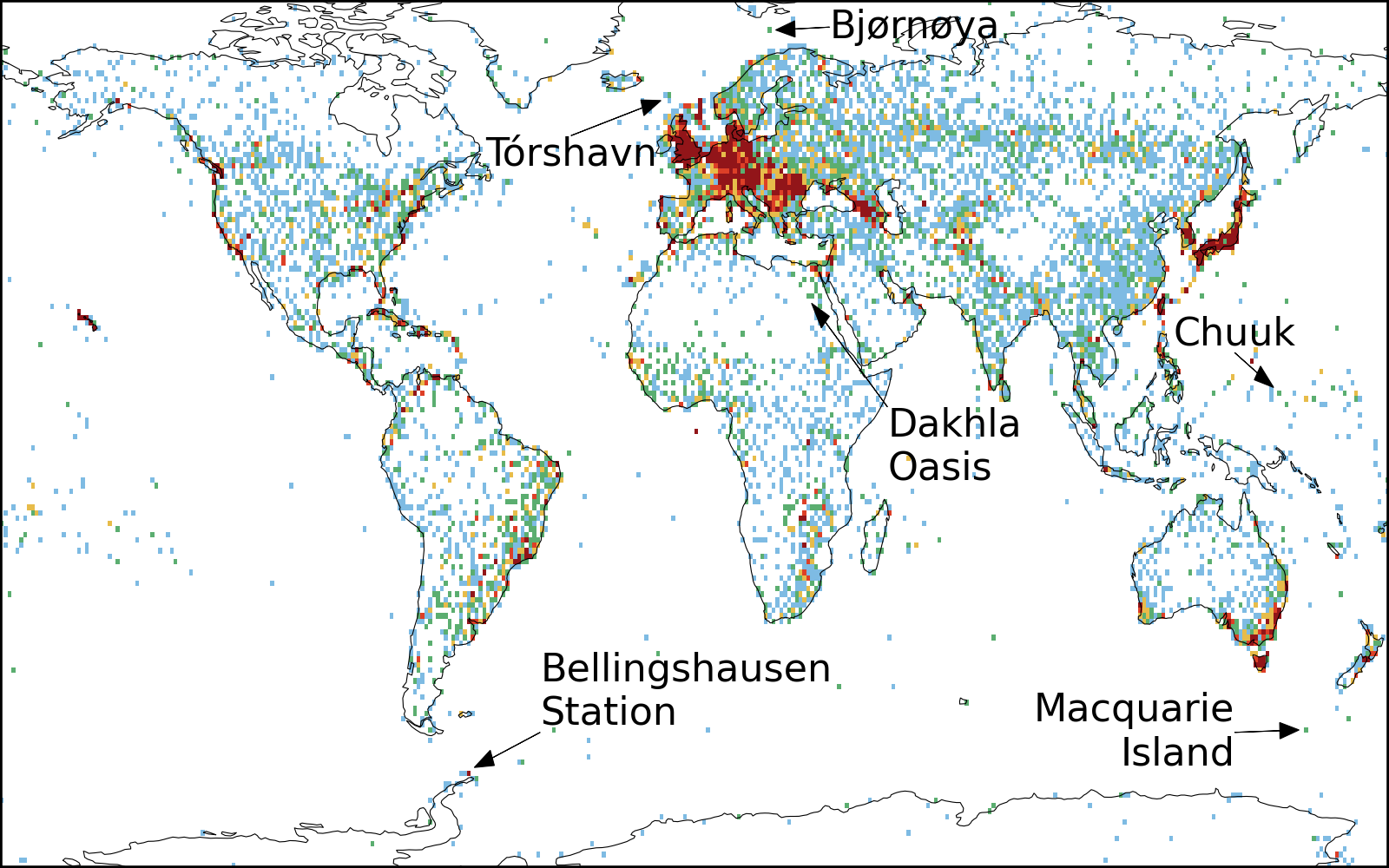 A map of cloud reporting stations in the World meteorological organisation databases. Some regions (particularly Europe) have a lot of measurements (in red). Others have very few (blue/green) or none (white). A few of the cloudiest stations (see previous article) are marked.

There are thousands of weather stations around the globe, but they not evenly spaced. Most are on land, but some ships and aircraft provide data on ocean regions to weather forecasting centres (like the UK Met Office and the German weather service). Even with all this data, most of the ocean and large fractions of land are not covered. If we really want to measure clouds everywhere, we need to use satellites.

Clouds are one of the most striking features of the Earth when viewed from space. This made them a target of some of the first satellites in the early 1960s (Vanguard 2 and TIROS-1) and also why it is so depressing when TV and cinema produce clouds that look so ... weird.

Earth in Battlestar Galactica - where are the clouds? The blue marble image (taken by a different Apollo) is much cloudier (NBCUniversal/NASA)

Remember our two criteria for a cloud:

It is difficult to determine if something is wet from space, so to find clouds, satellites look for things that are white. This is pretty easy when they are over a dark ocean, as there is a high contrast between the cloud and the background. But what if you want to measure a cloud over a bright background, or at night? We need another way to detect clouds. [1]

A third property of clouds¶

So how do satellites detect clouds at night? We need to add a third property of a cloud.

The atmosphere get colder as you go higher up [2]. As clouds can be many kilometres from the surface of the Earth, this means that they are almost always colder than the ground below them. Satellites see this difference in temperature as a difference in the amount of infrared light emitted by clouds. In the same way thermal imaging cameras can see people at night, satellites can detect clouds as colder regions in images.

An image of a cloud with a normal camera and with a thermal imaging camera. On this day, the temperature at the surface was about 4C, the cloud is almost 10 degrees colder at -5C.

With these sophisticated tests for finding clouds in satellite images, we can build up a picture of cloudiness around the whole world. 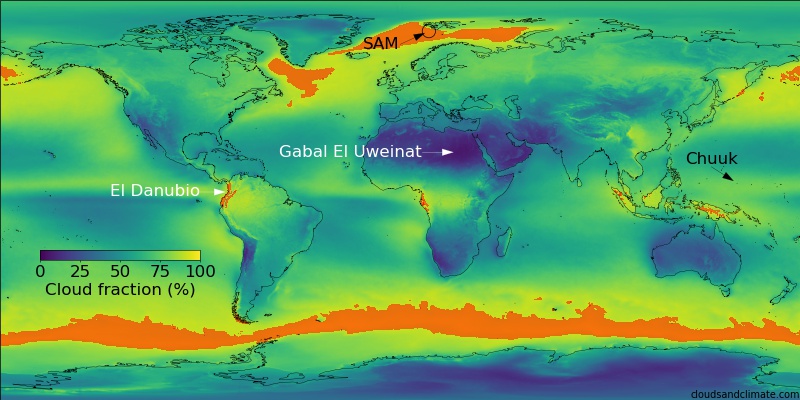 Average cloud fraction for 2015-2020 (from MODIS Aqua). Areas above 92% cloudiness (our previous record for Chuuk Lagoon) are coloured orange. Click to see a higher resolution version.

Averaging five years of cloud data, we can see that the ocean is really cloudy! Anywhere orange on the map has an average cloud cover more than our record for Chuuk Lagoon (92%). The cloudiest places have average cloud covers of over 96% (only 2 cloud-free weeks per year). [3]

The cloudiest ocean location in this record is SAM (the Svalbard Archipelago Maximum), just north of Norway. With 96.7% average cloud cover, this is already very cloudy ... but it turns out this is not even the cloudiest place in the world!

The cloudiest place on Earth¶

If you head west from the Colombia city of Cali, you pass through some mountains that form part of the northern end of the Andes. These mountains are covered with a thin strip of rainforest (less than 80 km wide). This region, around El Danubio (3.6N, 76.7W), is the cloudiest place on Earth, with a average cloud cover of an amazing 98.6%. 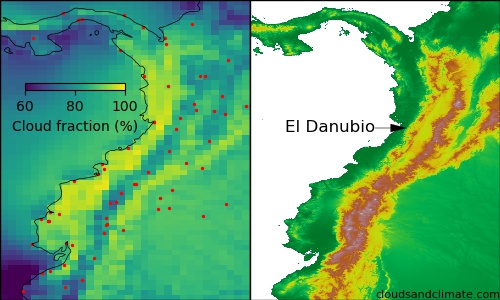 Average cloud fraction over Colombia and Ecuador (surface stations as red dots). On the right - the mountains and valleys.

It is particularly cloudy here because strong winds [4] blow very moist air from the Pacific ocean onto the Western coast of Colombia. The average air temperature here is about 27C, and the warm moist air in this region makes thunderstorms much more likely.

Not only is this region the cloudiest in the world, it is also one of the wettest! The town of Vigía de Cuvaradó, about 300km to the north, experienced a total rainfall of 26,871mm in 1974 (for comparison, London gets about 600mm per year).

This super-cloudy region is sandwiched between the mountains and the sea and is remarkably thin (only 30-50km across). This means that neither the stations in the Cauca valley to the East, or on the coast, are nearly as cloudy. Without satellites, it would have been much harder to find.

Let's start with London (because that is where my office is). Here is one picture a day over Imperial College for (almost all of) 2020.

An image a day over London in 2020. London is cloudy, but there are a lot of clear days too!

The average cloud cover in London is 72%. This is not evenly spread throughout the year, many days are completely (100%) cloud covered, but there are a lot of clear days too (it is best to visit in the summer).

In comparison, Tórshavn is considerably cloudier than London (by quite a lot), but it still has a lot of clear days. The images here also show how difficult it can be to tell the difference between snow and cloud. If you can see the sea in an image, it is actually a mostly clear day.

An image a day over Torshavn in 2020. It is cloudier than London, but there are still a lot of clear days. It can also be quite snowy, which makes it look like there is even more cloud.

Here is the clearest (least cloudy) place in the world, the desert just to the east of Gabal El Uweinat. This is at the border of Egypt, Libya and Sudan. The average cloud cover here is only 6.1% and you can really see it - very few days are even partly cloudy!

But around El Danubio in Colombia, it is cloudy almost all the time. There is only one day in 2020 where it is less cloudy, but even on that day there is still a lot of cloud.

An image a day around El Danubio, Colombia in 2020. The cloudiest place on Earth!

98.6% cloud really is amazingly cloudy. In the whole of 2020, there are only a few days that are even close to being clear, thanks to the tropical location, mountains and regular transport of moisture into the region [5].

How can I get there?¶

Naturally the next question is: how can I visit these amazing places? Visiting the desert in North-Western Sudan (the least cloudy place) is pretty tricky. With an extreme lack of water, modern exploration only really began with the invention of the car.

Luckily, the cloudiest place in the world is much easier to get to! There are direct flights to Cali from the US and Europe, or you can change in Bogota. From there it is a short drive (or cycle) along the old road towards Buenaventura, down the Anchicayá river through one of the worlds biodiversity hotspots. I know where I want to go on my next holiday!