By Edward Gryspeerdt
- Wed 02 June 2021
Link to paper: Climate impact of aircraft-induced cirrus assessed from satellite observations before and during COVID-19

What would a world without aircraft look like? Obviously there would be a big impact on the economy and global travel would take a lot longer (perhaps with a return of ocean liners). There would also be a climate effect, as aircraft burn fossil fuels and create greenhouse gases. They also create clouds, known as contrails.

Contrails are thin, wispy clouds that spread out to cover the sky under the right weather conditions. New contrails are easy to spot as they have a distinctive, straight-line shape, but older contrails can look like natural clouds. This makes it difficult to work out the amount of high clouds that are actually generated by aircraft.

The reduction in air traffic in response to the COVID-19 pandemic provided a way to do this. With many fewer aircraft flying, it gives us a window into a world without any aircraft, allowing us to estimate the climate impact of aircraft changing clouds. 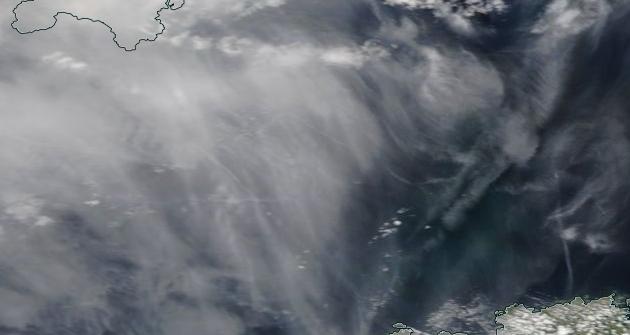 Thin cirrus over the English Channel. The lines in the image are fresh contrails, but how different would the cirrus cloud be without aircraft?

Condensation trails (contrails) were first observed behind aircraft during World War 1 [1] and have become a more common feature of our lives as air travel has increased.

When aircraft burn fuel, they create heat and water. When this hot, moist air from the aircraft exhaust mixes with the cooler, drier air found at high altitudes, the humidity increases. If the conditions are right, the relative humidity can increase enough to form a cloud. This is the linear contrail that you can observe directly behind an aeroplane. 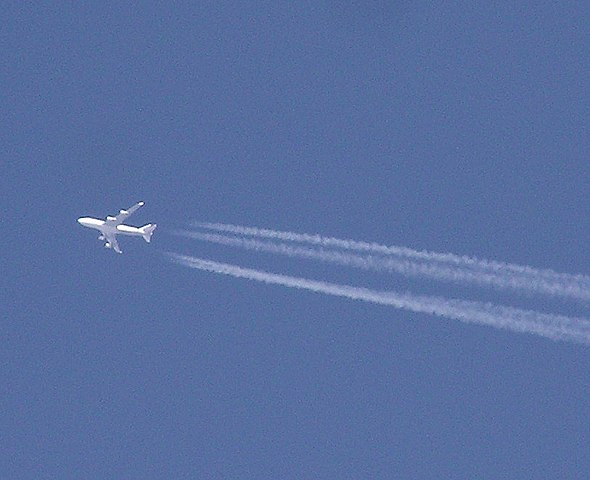 If you know the temperature and humidity of the engine exhaust, the Schmidt-Appleman criterion [2] determine whether a contrail will form. However, determining the lifetime, coverage and eventual climate effect of contrails is much harder [3].

Visible and invisible effects of clouds¶

All clouds have warming and cooling effects on the climate, but the balance between these effects varies. Remember our criteria for a cloud.

2 and 3 are most important for the climate effect. All clouds are white and reflect light back into space - a cooling effect. Thicker clouds reflect more light so have a stronger cooling effect. This is the visible effect of clouds.

Contrails are thin (so have a weak cooling effect), but also very high and cold (so a strong warming effect). This makes them almost perfectly designed to warm the Earth. Knowing lifetime of contrails and the area they cover is critical to work out the impact of aircraft on the climate.

How long do contrails last?¶

Contrails form through the mixing of exhaust and environmental air. Usually, as more environmental air is mixed into the contrail, it will eventually evaporate again within a few minutes. This is not always the case though, some regions in the upper troposphere (the part of the atmosphere where aircraft fly) have humidity high enough for a cloud to grow, but one has not already formed. When contrails form here, they don't evaporate, but grow instead!

Some contrails evaporate quickly, others can live for a long time, depending on the environmental conditions. More details on this plot in the notes [4]

You can think about the atmosphere in the grey region as waiting to form a cloud, it just needs to be triggered (by an aeroplane) into doing it. When contrails form in these 'cloud-ready' regions, the resulting cloud can eventually spread out to cover the sky lasting for many hours. These long-lived contrails are the ones that have a really large impact on the climate. 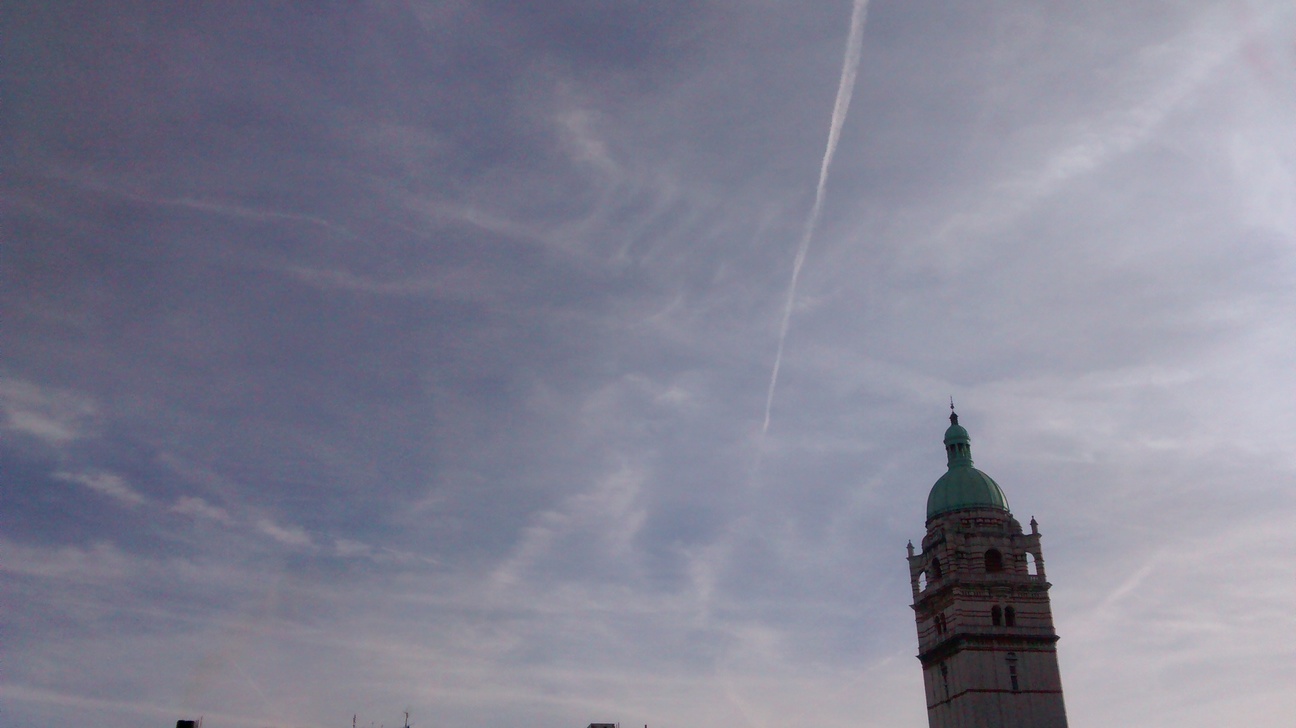 Thin cirrus cloud above Imperial College. These are long-lived contrails, but if you didn't know they were initially triggered by aircraft, could you tell?

Unfortunately, these long lived contrails look really like naturally formed cirrus clouds, so working out the total coverage of contrails is really difficult [5]. One way is to use a climate model that simulates contrails, but you can only simulate simplified versions of contrails [6]. If we want to use observations to measure the effect of aircraft on clouds, we need an experiment where aircraft are forced to stop flying for a while...

From mid-March 2020, multiple countries closed their borders or severely restricted international travel in an attempt to slow the spread of COVID-19. This led to a large decrease in passenger numbers and an almost 70% reduction in flights in 2020 compared to 2019. A perfect opportunity to study the climate impact of aircraft and how they change clouds! 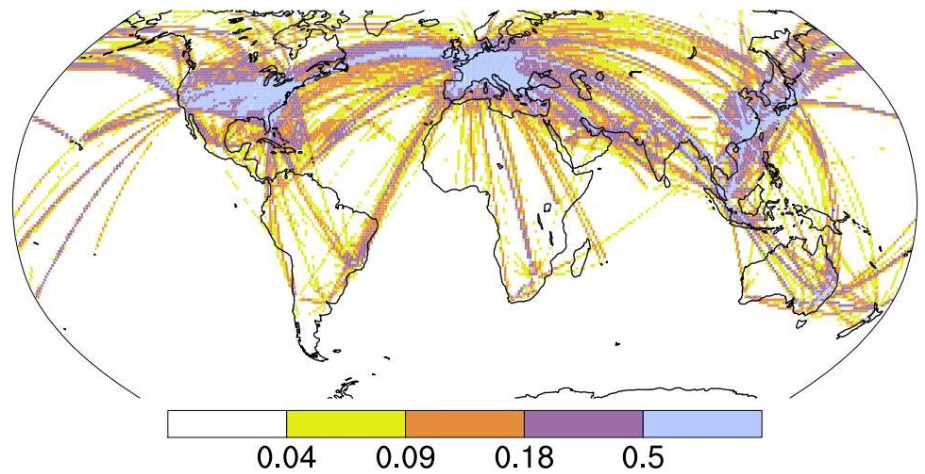 Map of the change in flight density due to the COVID-19 shutdown. Blue regions usually have the highest desity of flights, and also the largest decrease due to the shutdown. Notice the large decrease over Europe and the USA. Image from Quaas et al., ERL, 2021.

In this study, led by Johannes Quaas at the University of Leipzig together with Olivier Boucher and Robert Vautard at IPSL, we used satellites to measure how the amount of high, thin clouds changed in 2020.

The change in cirrus fraction (average amount of sky covered by cirrus cloud) in 2020 (blue) compared to the average from 2011-2019, for five different levels of change in flight distance. Regions with larger changes in aircraft activity during the shutdown are on the right. Image adapted from Quaas et al., ERL, 2021.

There was less cirrus in 2020 than you would expect, based on the average for 2011-2019. The biggest change was in regions where there was a large decrease in the distance flow by aircraft. Problem solved?

Clouds change with the weather - changes in weather can also impact how likely clouds are to form. In March/April 2020, Europe was covered by a (record breaking) high-pressure system that kept the skies clear for weeks. Was the decrease in high, thin cloud in 2020 just due to changes in the weather?

The weather situation on the 8th of April 2020. High pressure systems (where there is an 'H') usually have little cloud. Did that change the amount of cirrus? Image courtesy UK Met Office, contains public sector information licensed under the Open Government Licence.

To get a better idea of the contrails that would have formed in 2020 had aircraft still been flying, this paper uses 'circulation analogues'. Each day in 2020 is matched to days with similar weather patterns in the 2011-2019 period. The average cirrus cloudiness from these 'matched' days then gives an estimate of how cloudy 2020 would have been if aircraft were still flying, as you can see with the orange dots here.

The result is pretty spectacular! If only days from 2011-2019 that match the weather situation in 2020 are looked at, the amount of cirrus in 2020 is almost exactly the same as expected in regions where there is no change in aircraft (on the left). However, in regions where there was a large decrease in aircraft, there was an even larger decrease in cirrus than first expected!

Matching the weather patterns in 2020 to previous years means that we can now use the cirrus change in 2020 as a pretty good estimate of the actual aircraft impact on thin high clouds! In the regions where there was the biggest change in air traffic in 2020, there was almost 10% less cirrus than we would have expected.

In regions where there was the largest change in air traffic, there was an almost 10% decrease in the cirrus fraction in 2020.

This change in cirrus can then be used to think about what the world would look like without airplanes. How would the climate be different?

The effect of human activities on climate is often measured by 'radiative forcing' - how much the flow of energy into/out of the Earth system changes. Greenhouse gases have a positive radiative forcing (a warming of about 3 Wm-2). Using the COVID-19 shutdown to measure the amount of contrail cirrus, we estimate that the warming from contrails is about 0.061 Wm-2 (about 2% of the total).

This looks small, but it is already much larger than the warming from the CO2 emitted by aircraft, more than doubling the climate impact of aircraft [7]. There is an important difference with contrails though, when compared to greenhouse gases - contrails have a much shorter lifetime.

If you stopped flying aircraft today, the warming from contrails would disappear within a few days. The greenhouse gas effect would continue for hundreds of years. Minimising the warming from contrails would be an important short-term win, but we ultimately still have to move away from fossil fuels if we want to limit the damage caused by climate change.