Climate change is one of the most significant challenges facing us today. Increasing greenhouse gases from the burning of fossil fuels has raised the temperature of the Earth and will continue to do so in future. Defining the pathway for countries to reduce their emissions to 'net zero' is a key goal of the COP26 conference (currently running in Glasgow). But how did we get here and importantly for us, what is the role of clouds?

Over the last century, the temperature of the Earth has increased, such that it is now around 1C warmer than the pre-industrial period (1880-1900). This temperature change has been caused by external changes imposed on the climate system, also known as climate forcings.

The temperature change over the last 170 years by the forcing agent. Notice the greenhouse gases (GHGs) produce more warming than we have actually experienced. The cooling effect of aerosols hides some of this warming. Adapted from CarbonBrief. [1]

You have probably heard about the main one - greenhouse gases (GHGs), particularly CO2, have increased, warming the planet. But the warming from GHGs is larger than we have observed. This is because their warming effect is being partially offset by the cooling effect of aerosols (and their changes in clouds).

Atmospheric aerosols are tiny particles (around a thousandth the width of a human hair). There are lots of natural aerosols in the atmosphere (like desert dust and sea salt), but humans don't change these much, so they don't count as a climate forcing. We really care about the aerosols created by human activity.

Desert dust is one of the largest natural sources of aerosol, but because it is a natural part of the climate system, it doesn't count as a climate forcing.

Lots of human activity generates aerosols, but particularly the burning of fossil fuels. This means that there are more aerosols than there would be without humans, making aerosol effects climate forcings. Aerosols scatter (redirect) light in all directions, this means that some of the light coming from the sun is reflected directly back into space before it is absorbed by the Earth.

With an increase in aerosols, this means that the Earth gets less energy from the sun and so cools down. The reflection of sunlight by aerosols is known as the direct effect.

You can see this effect yourself! When you look at a view over a long distance, the haze you see is the impact of aerosols. [2] [3] 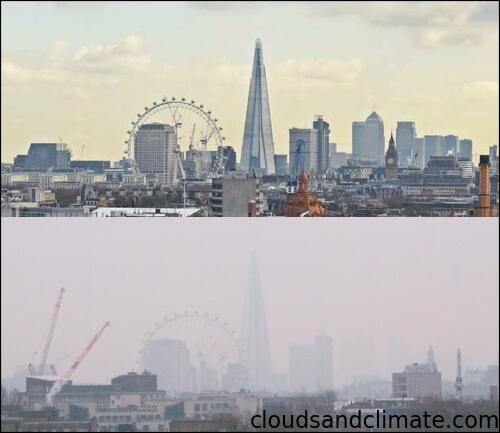 The impact of severe aerosol pollution over London in January 2017 - as viewed from Imperial College. This haze in the bottom image is due to aerosol scattering and absorbing light

This scattering of light by aerosols makes it difficult to see long distances, but also keeps the Earth cool. The size of the effect is quantified by a radiative forcing, a measure of how much they are changing the energy absorbed (or emitted) by the Earth. The direct effect is not small, but it is less than half of the cooling from aerosols. Most of the aerosol cooling comes from the role aerosols play in cloud formation [4]

How do you make a cloud droplet?¶

Forming a droplet of pure water in the atmosphere is surprisingly difficult. For a droplet not to evaporate, it needs to be large enough, but forming large droplets from water molecules collecting together by chance is very, very unlikely [5]. Instead, almost all droplets in the atmosphere form by water condensing onto aerosols. This means that when you have more aerosols, clouds typically have more droplets.

This means that clouds with lots of aerosol have more droplets, so their droplets are smaller than average (as they are sharing the water out between them). This spreads the water out more effectively in the cloud, making it more reflective. 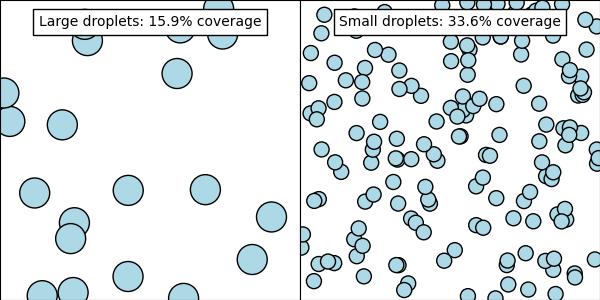 These two sections of cloud contain the same amount of water, but the droplets have half the radius on the right (like a polluted cloud). This means there are more of them, so they cover a larger area and reflect more light. [6]

With the increase in aerosol pollution since the industrial revolution, this means that clouds are now more reflective than they were 200 years ago. This is an additional cooling effect with various names, including the Twomey effect, the cloud albedo effect and the first indirect effect, where the 'indirect' part is in contrast to the direct effect of aerosols (via radiation).

This effect on the climate is quantified as the 'radiative forcing from aerosol-cloud interactions' or the RFaci. But the aerosol impact on clouds doesn't stop here.

Wet or dry (is it going to rain)?¶

Small droplets mostly bounce off each other when they collide (on the left), but large droplets stick together and form rain. Polluted clouds (with smaller droplets) are less likely to rain!

Preventing rain may mean that the cloud collects more water (and so becomes even more reflective; see this article). Suppressing rain may also mean that there are more clouds, more intense thunderstorms and potentially more evaporation from clouds.

A change in precipitation can have a significant effect to the behaviour of a cloud. These are just a few of the many suggested changes.

The climate impacts of these effect is very uncertain, but they don't change the overall picture. Aerosols cool the climate, particularly through their interaction with clouds.

This cooling effect from aerosols and their effect on clouds not only keeps the current climate a bit cooler than it would otherwise be. But the size of this cooling effect is most uncertain component of the human forcing of the climate. This creates a number of uncertainties for how the climate will change in the future.

Aerosols are bad for your health - really bad. Particulate matter is associated with 4.2 million premature deaths a year [7], so governments have been acting to reduce aerosol emissions. In Europe and the US, this has already lead to more sunlight reaching the surface over the last 30 years. 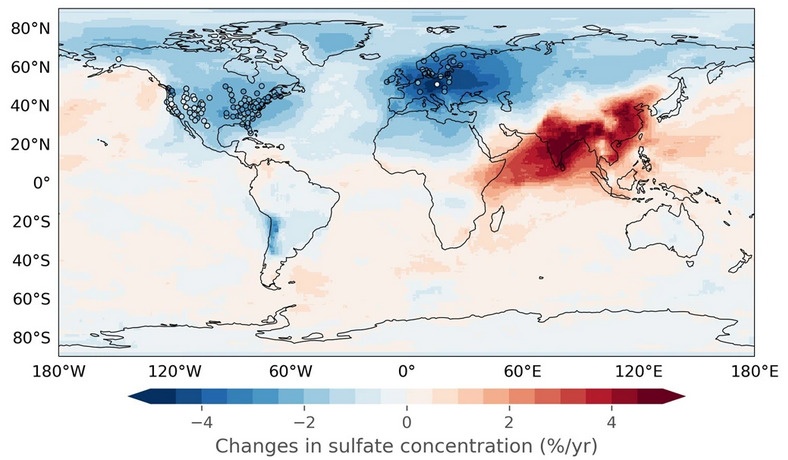 As the Earth warms up, the properties of clouds change. This is known as the cloud feedback, and it is also quite uncertain (although we know it increases the warming further). One way to measure the effect is to look at how the climate has warmed over the last 100 years. The problem is that because the aerosol effect on clouds are uncertain, we don't know how hard humans have been pushing the climate to change!

If the aerosol effect on clouds is very small, then the total human forcing of the climate is mostly just the GHG warming. The climate still warms in the future, but a bit less than we expected.

But what if the aerosol effect on clouds is large? Well, then things become a bit scarier. This means the aerosol cooling offset a lot of the GHG warming, so the total human forcing of the climate so far has been quite small (we weren't even really trying).

With the warming we have already experienced, this means that the climate is actually really sensitive to GHGs. As GHGs continue to increase in the future, this could cause the Earth to warm up a lot!

Improving our knowledge of clouds (and climate)¶

All of this shows that clouds have a role to play in the human impact on the climate. By changing cloud properties, human activities have been creating a cooling, that partially offsets the warming from greenhouse gas emissions. This size of the cooling is quite uncertain, which can lead to uncertainties in projections of future warming. 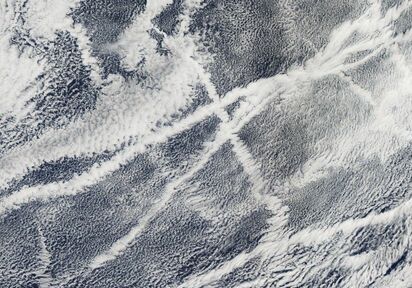 These lines in clouds are formed by ship aerosol emissions. Find out more about how we are using ships to 'experiment' on clouds here.

This is where my work comes in. Here at Imperial College, we are using satellite, models and in-situ measurements to study clouds and how they respond to human activity. The articles on this website will help illuminate this otherwise hazy area, showing how our work (and that of others) helps improve our projections of the future climate.

There are too many papers to list on this subject, but a recent one that covers this area is 'Bounding Global Aerosol Radiative Forcing of Climate Change' by Bellouin et al (2020). This paper was the basis for the IPCC report in this area, particularly section 7.3.3 in the recent report. 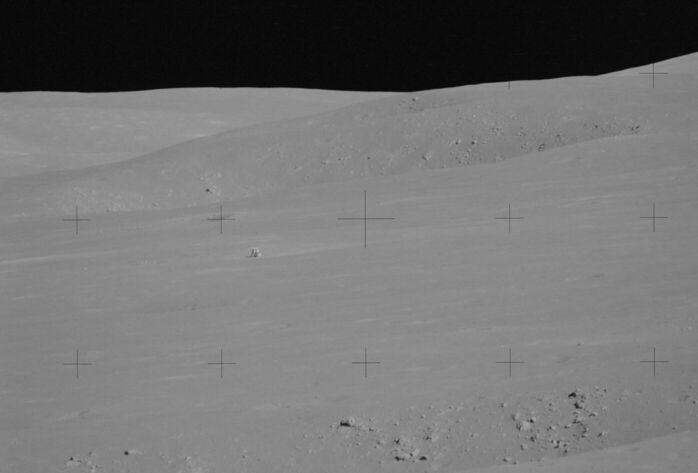 View of the Mount Hadley delta from Apollo 15. Image from Johnson Space Center. How far away are those hills in the background?