By Edward Gryspeerdt Rebecca Murray-Watson
- Fri 06 May 2022
Link to paper: Stability dependent increases in liquid water with droplet number in the Arctic

Clouds in a changing Arctic¶

The Arctic is one of the fastest-warming regions of the Earth. Temperatures at the north pole are regularly more than 5 degrees above the pre-industrial mean and there has been a steep decline in Arctic sea ice over the last century. 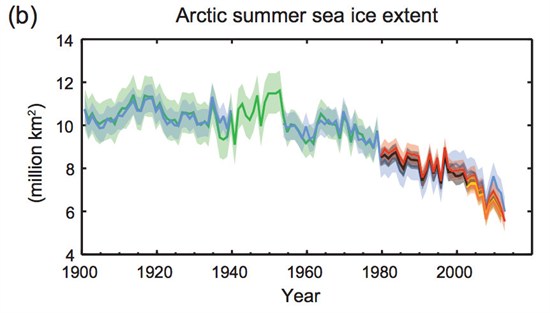 There is a lot less sea ice in the Arctic during the summer than there used to be... (IPCC AR5)

Reduced sea ice has opened up the Arctic Ocean to new industry and shipping routes. This has the potential to increase particulate pollution (known as aerosol) in the Arctic.

Individually, both increasing temperatures and increases in aerosol can make clouds more reflective, providing cooling effects that offset some of the warming. However, if temperatures increase AND the Arctic becomes more polluted, this has the opposite effect. Clouds in a future, warmer, more polluted Arctic are dimmer, making the warming even worse.

How wet is a cloud?¶

But how can you make a cloud dimmer? This comes down to a question we have looked at before - how much water can a cloud hold, and how is this modified by aerosols? All else being equal, a cloud with more water in it is more reflective, so reducing the amount of water in a cloud can make it dimmer.

Most previous work has focussed on stratocumulus clouds, which form in large regions near the west coast of continents, much closer to the equator. 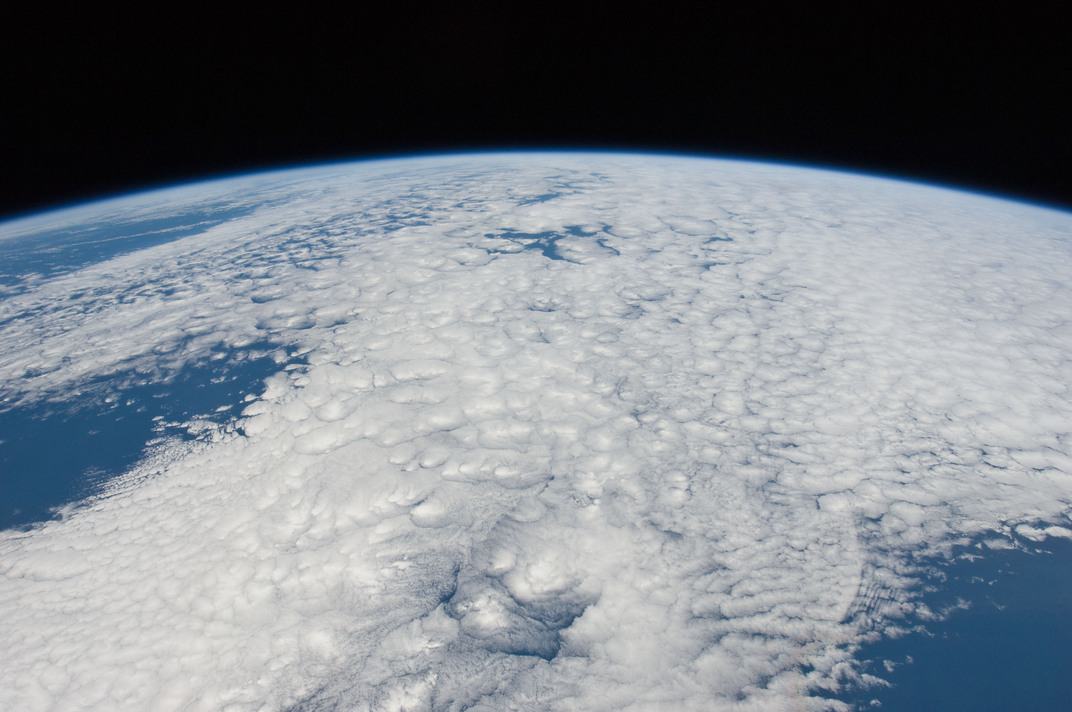 Some stratocumulus clouds, as seen from the ISS. They are not in the Arctic. (ISS30-E-20366, NASA Johnson Space Center)

Cloud droplets form on aerosol particles, so a cloud forming in a polluted environment typically has more droplets, giving it a higher droplet number concentration (Nd). If the amount of water in the cloud is constant, the cloud droplets are on average smaller, making the cloud more reflective (an effect known as the 'Twomey effect').

As you might expect, the aerosol impact on clouds is not as simple as this. The amount of water in a cloud doesn't stay constant.

If the cloud is relatively clean (not much aerosol), the liquid water path (LWP - a measure of the total amount of water in the cloud) typically increases as you add more aerosol to the cloud. This is because the cloud droplets are getting smaller and so are less likely to form rain. 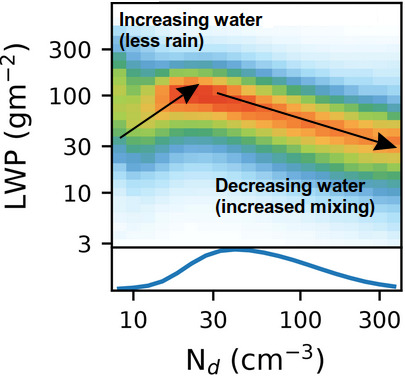 Over most of the globe, the LWP has two distinct behaviours. It increases with droplet number (Nd) when aerosol (and hence Nd) is low by reducing rain. At some point the cloud is polluted enough that you run out of rain to stop. The impact of mixing then becomes more important (Gryspeerdt et al., 2019).

Adding more aerosol also makes the cloud mix with the air around it faster. This air is drier (otherwise it would already be cloudy), so mixing it into the cloud reduces the amount of water in the cloud. This effect has a smaller impact on LWP than changes to rain, so if a cloud is raining, the aerosol-induced reduction in rain dominates and the LWP increases as the cloud get more polluted.

Eventually, enough aerosol is added that the cloud stops raining. Adding more aerosol can't increase the water in the cloud further; if the cloud has already stopped raining, adding more aerosol can't make it rain less. At this point, the mixing effect becomes important, so the LWP starts to decrease as the amount of aerosol increases further. Over most of the world, the mixing effect dominates. Polluted clouds hold less water (blue in the following map). 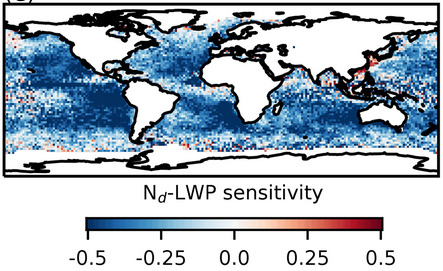 What is different about the Arctic?¶

While the map is blue over most of the globe, in much of the Arctic, it is red (polluted clouds hold more water). 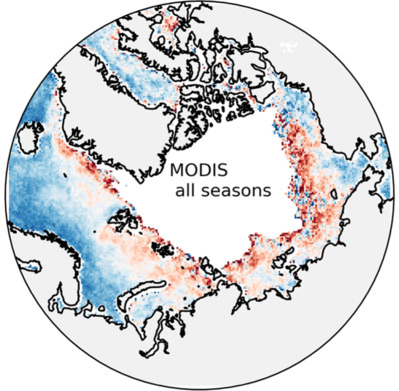 The sensitivity of LWP to Nd in the Arctic. Red - clouds get more water in when they are more polluted, blue - less water (Murray-Watson and Gryspeerdt, 2022).

So why does the LWP increase with pollution as you get further north? For clouds nearer the equator, the important factor is the cloud top humidity. If you mix wetter (more humid) air into the cloud, the mixing induced reduction in LWP is smaller. While this is important in the Arctic, the above cloud air here is typically quite humid already. Instead, it is the amount of mixing that dominates. 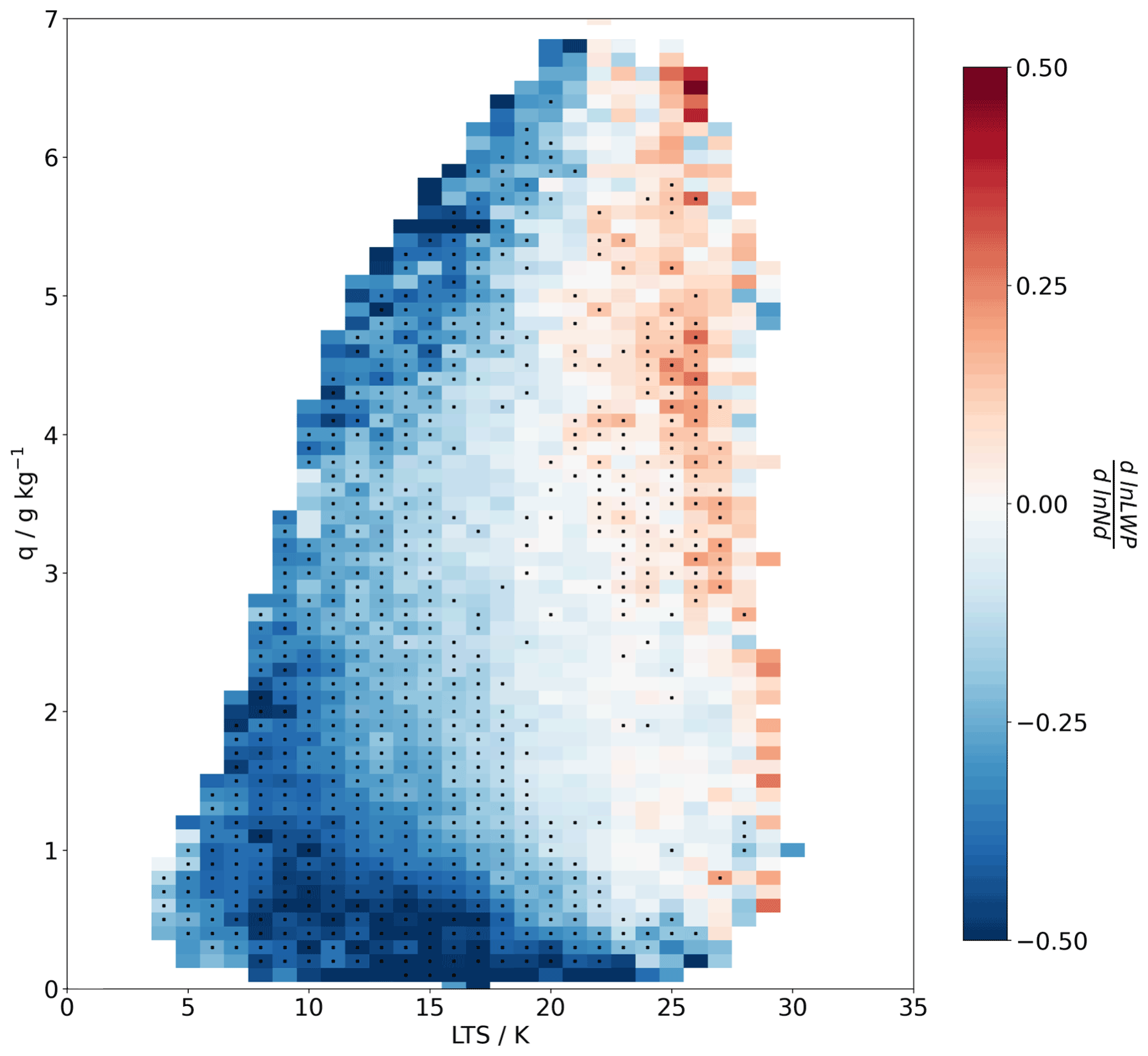 While the sensitivity (colours as in other plots) is affected by cloud top humidity (q) in the Arctic (changes in colour top to bottom), there are much larger changes as a function of low troposphere stability (LTS - changes in colour left to right).

In general, the atmosphere is more stable near the poles (as the surface is colder and less likely to trigger convection), which explains the pattern we saw in the map [1].

The measure of stability used is related to the temperature difference between the surface and an above-cloud level. Under climate change, the surface temperature is projected to strongly increase, but the above-cloud temperature doesn't change by nearly as much. This means that the stability in the Arctic is projected to decrease. From what we saw above, we can expect the aerosol impact on clouds to change in the future. However, this reliance on stability also means that the way aerosols influence clouds also depends on temperature.

There are a couple of reasons why this matters. The first is that it means that clouds in a warmer Arctic respond differently to aerosols than those in a cooler Arctic. To understand how clouds respond to aerosol, we typically assume that this response is the same today (when we can observe it) as it was 200 years ago. A temperature-dependent aerosol effect means this is clearly not the case.

Clouds from 200 years ago in 'Wivenhoe Park, Essex' by John Constable. Unfortunately we can't measure how these clouds respond to aerosol, so we have to measure clouds today instead (Wikimedia Commons).

The enhanced mixing effect is not currently included in many climate models, which leads to uncertainties about the aerosol impact on the climate [2]. While we have been talking about this as a temperature-dependent radiative forcing, you can also think about it as a cloud feedback (a response of clouds to warming) that depends on aerosol. This means that models are not going to be able to get the cloud feedbacks accurately either - you have to simulate the aerosol processes correctly to calculate cloud feedbacks [3].

It also makes things a big complicated semantically (sorry about this, feel free to skip to the next section). A radiative forcing is external to the system, so cannot depend on temperature changes, but this doesn't solely depend on temperature either, so it is not a feedback. It may be possible to separate out the forcing and feedback components, but it is not immediately clear where that line would be.

Heating the ocean in the summer can delay the formation of sea ice in the autumn, so we have to be very careful about modifying clouds in the Arctic (either inadvertently or on purpose). It is also critical to ensure regulations are in place to prevent pollution in the Arctic from having a detrimental effect on the local climate [5]. 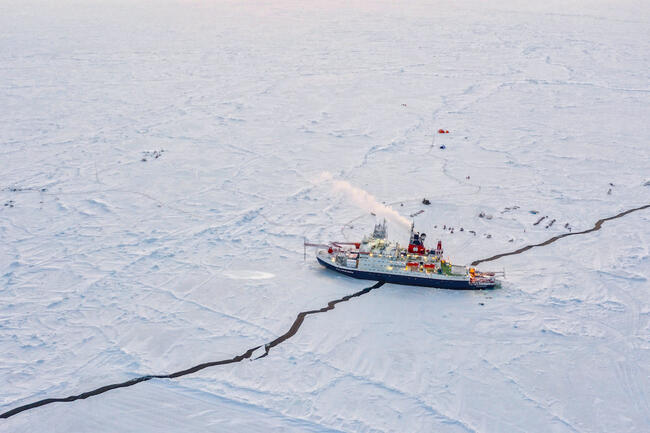 This is actually a research ship during the MOSAiC expedition and not emitting a huge amount of aerosol (as it is stuck in the ice). It is a nice picture of a ship in the Arctic though, so I included it here (NASA).

While many studies have looked at cloud feedbacks and aerosol-cloud interactions, these results how that when the two effects combine, they can have unexpected effects. We must be particularly careful of these changes to aerosol effects under climate change. Even effects we think we understand in the present-day atmosphere could be significantly different in a warmer climate [6]. We need more accurate simulations of clouds than are available in current climate models as well as strong controls on industrial emissions in the Arctic to help protect it from future changes.

This article is based around the paper 'Stability dependent increases in liquid water with droplet number in the Arctic', led by Rebecca Murray-Watson You can read it for free.