By Edward Gryspeerdt
- Mon 09 May 2022
Link to paper: The impact of ship emission controls recorded by cloud properties

200 miles off the US coast, there is a line where the clouds change. It is not obvious if you are down at the ocean surface, but if you look at satellite images, you can see that clouds offshore can detect ships! If the weather conditions are right, ships leave trails in clouds known as 'shiptracks'. These shiptracks are very rare near the coast, but as soon as you get more than 200 miles out to sea, they become very common. 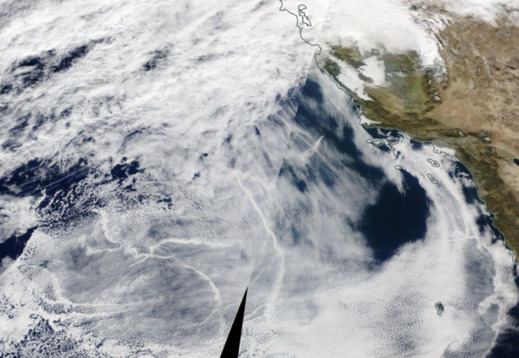 Shiptracks off the west coast of the USA (San Francisco Bay is a the top of the image). The white cloud lines in the bottom left are generated by ships (NASA Worldview).

The 200 mile boundary is the edge of the 'exclusive economic zone' (EEZ), the region where a country controls rights to fishing, mining and oil exploration. Clouds don't care about any of this, and certainly don't care about the law, so what is happening at this legal boundary?

The answer involves another legal right within an EEZ, the right to control pollution.

A cargo ship might cost more than £100,00 per day to run, and most of this cost is fuel. If you run a ship company, you want to burn the cheapest fuel possible to keep costs low. The best solution is to use something that no-one else really wants.

Ships typically burn very heavy, viscous fuel oils, that are more like tar than the liquid fuel you might up in a car [1]. With a high viscosity making fuel oils at room temperature flow more like ketchup or shampoo, they have to be heated to over 100C to even be ignited in the ships engine. You wouldn't want to put this in your car. 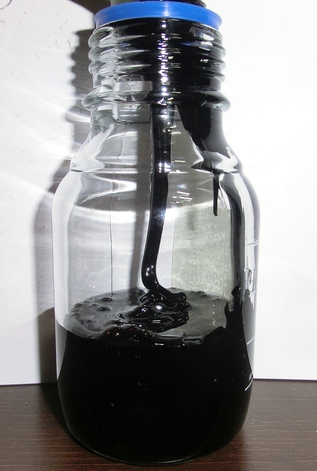 Heavy fuel oil - at room temperature it is a thick black liquid, with a similar consistency to ketchup. (Wikimedia Commons/Glasbruch2007)

Until recently, ship fuels would often have a large amount of sulphur. This sulphur is a natural part of the crude oil when it is pumped out of the ground. So called 'sweet' crude has less than 1% sulphur, but 'sour' crude can have as much as 10% sulphur by weight. As you might have guessed, sour crude (with its high sulphur content) is cheaper and hence is typically used for powering ships [2].

When burned, the sulphur in the fuel forms sulphur dioxide, some of which oxidises to form small sulphate aerosol particles. These aerosols are very bad for your health [3], but they are excellent nuclei for forming cloud droplets 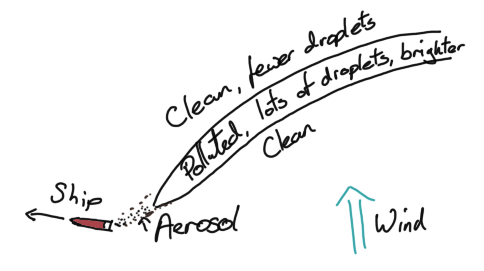 A sketch of a shiptrack forming behind a ship. The wind blows the track to the side of the ships course, changes in the wind over time given shiptracks their characteristic curves.

This means that in a thin line behind a ship, there is more aerosol, more droplets and so the droplets are now smaller (as you have to share the water out across more droplets. Amazingly, this change in droplet size can be seen by satellites - not with visible light, but in the infra-red. Small droplets reflect infra-red light better than larger droplets, so regions of small droplets show up as bright regions in this image. 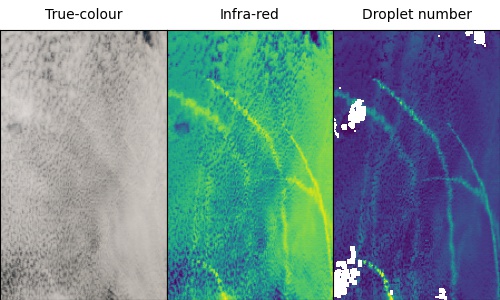 Many shiptracks are near impossible to see in normal, visible satellite images. They stand out clearly in infra-red, and even more clearly when you look at the droplet number concentration.

So we can see ships in satellite images of clouds because ships produce lots of aerosol, making cloud droplets smaller. Why can't we see ships close to shore then? Are the clouds just different?

It wasn't always like this. Back in 2003, shiptracks were everywhere, even right up to the coast. There were particular high concentrations of them near big ports (such as San Francisco). By 2014, the pattern had shifted a bit, but there were still large numbers of shiptracks everywhere. 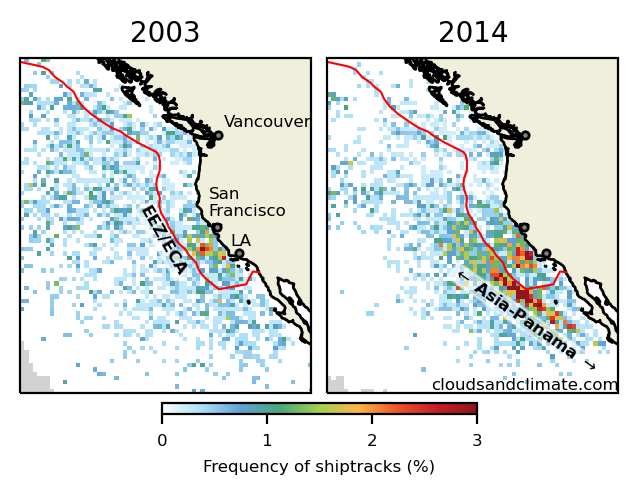 The locations of shiptracks in 2003 and 2014 off the west coast of America. The red line is the edge of the US/Canadian EEZ and some of the larger ports are shown. In 2014, most of the tracks are along the main route between Asia and the Panama Canal.

In 2015, there was suddenly a big change. Shiptracks within 200 miles of the US/Canadian coast almost completely disappeared, while remaining almost unchanged outside the EEZ. This change persisted into 2016 and continues to the present day. 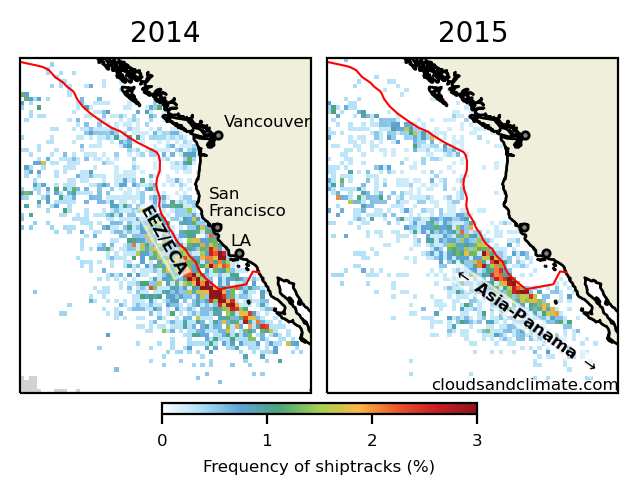 Shiptracks in 2014 and 2015 - shiptracks almost disappear from inside the US and Canadian EEZ (the red line), which is the edge of the ECA.

The timing of this change gives a strong hint to the cause. In 2015, the US introduced new restrictions on the sulphur content of fuel (because the pollution is bad for human health, not out of concern for the clouds) within an emission control area (ECA) that coincidentally is the same as the EEZ. This reduced the sulphur content of fuel by 90% within the EEZ, making the ships produce less aerosol and making them much less likely to create a visible shiptrack. 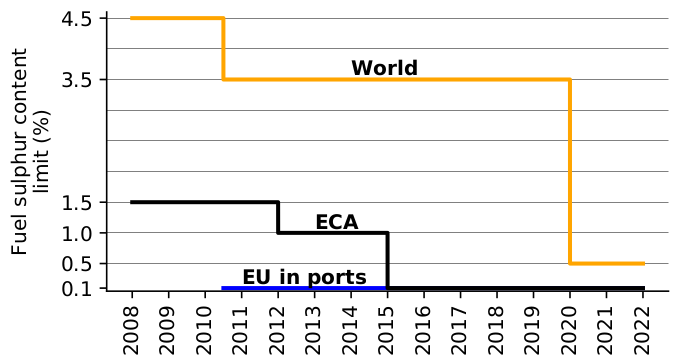 The changes in fuel sulphur content with time. The stringent limit in coastal emission control areas (ECA) was introduced in 2015, with global limits being introduced in 2020.

This change didn't just happen in the US. A similar restriction (following the International Maritime Organisation MARPOL convention) was introduced at the same time in the North Sea and English Channel. The change in shiptrack frequency is not as obvious, but there is still a clear change. 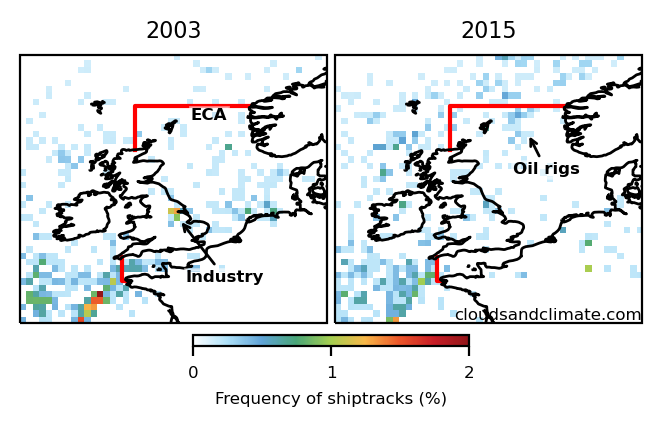 The locations of shiptracks in 2003 and 2015 in northwest Europe. Shiptracks are rarer here, but there are almost none in the English channel in 2014. There are a large number of tracks formed by oil rigs in 2014, rather than ships. The tracks over land are formed by industry - the Humberside region of England is easily visible in 2003, as are the lignite power stations in Germany.

At the start of 2020, regulations on fuel sulphur content were introduced worldwide. Although not quite as strict as the regulations in the ECAs, this has produced a reduction of shiptracks. Changes in the makeup of the global shipping fleet due to COVID-19 make the exact effect of the 2020 regulations difficult to isolate [4].

Shiptracks have a notable quality as being a cloud formation that is only really visible from space, meaning that they were only discovered in 1965 (with the first weather satellites) [5]. Despite this, they have an outsized importance as a tool for understanding how clouds and the climate responds to aerosols. They provide the closest thing we have to an experiment on clouds 'in the wild', allowing us to measure how much clouds change in response to aerosol and how quickly they return to normal.

How clouds change following the injection of ship aerosol. The timescales can be measured thanks to the 'natural experiment' performed by the ship.

But if we understand the clouds well enough, we can use observations of these changes in clouds to measure how much aerosol is emitted by a ship. This then allows us to measure the type of fuel the ship is burning, even far away from ports and fuel inspectors.

We have already seen how these changes in the clouds are due to changes in the types of fuel ships burn. This doesn't just work on average - in our group at Imperial College, we are tracking individual ship impacts on clouds globally in near real-time, providing a new method to measure cloud processes and to monitor ship fuel sulphur content at a global scale [6].

Ships crisscross the globe, much of the time far from coasts and inspectors. Satellites provide a way to monitor fuel usage, even in the most remote locations (Wikimedia commons/Hengl).

This article is based the article 'The impacts of ship emission controls recorded by cloud properties', which is available to read for free. Thanks to Tristan Smith (UCL Energy Institute), Matt Christensen (Pacific Northwest National Lab) and Fraser Goldsworth (University of Oxford), who worked with me on this research.