We spend a lot of time at Imperial looking at contrails. This is mostly to understand their climate impact or to understand how human activity changes clouds at a larger scale. Sometimes it is because they are just nice to look at.

These contrails are almost all generated by passenger or cargo aircraft, so they are long and straight (as this is the fuel efficient route between airports). Although we have automated systems for identifying contrails, they are easy to see in false-colour images created using infra-red data from satellites. The yellow and blue lines in this false-colour image from of the UK last Saturday are contrails (and you can see them forming on from the ground in this video). 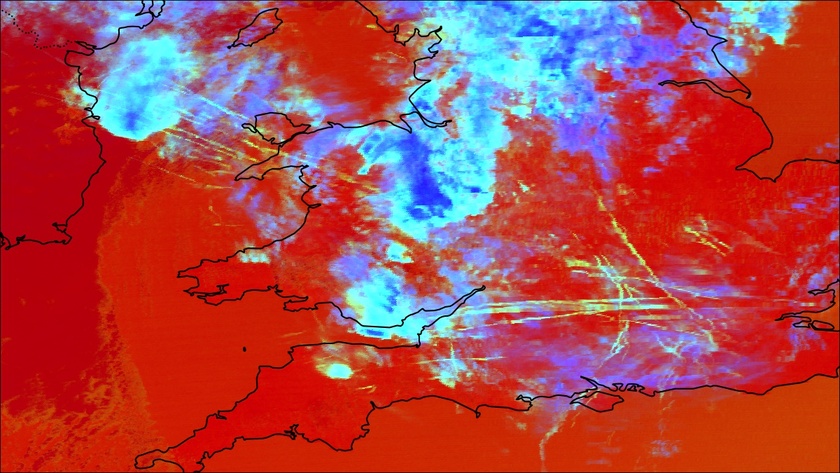 A false-colour image of contrails forming over the southern UK and Ireland on the 26th of February 2022. The yellow and blue lines are contrails, high clouds are in blue and clear sky areas and low clouds are red.

If a pilot detects they are forming a contrail (often with the very low-tech solution, like a mirror [4]), the easiest way to stop forming that contrail is by flying at a different altitude [5]. However, sometimes pilots are less worried about contrail formation (or it is a secondary concern). This allows us to see military aircraft using satellites, even when they are not reporting their position publicly (such as to ADS-B Exchange). 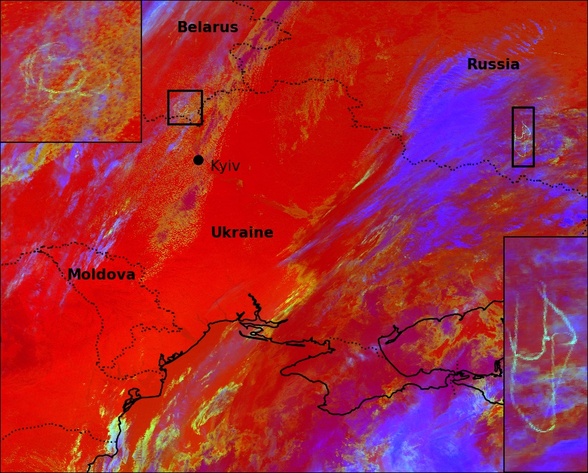 Contrails (in the highlighted boxes) forming over Russia and Belarus during the invasion of Ukraine.

Contrails are not easily to see when using visible light, particularly if they are above other clouds, as they are not very bright. However, if we look at the correct wavelengths of light (in the infra-red), they stand out clearly. We use these wavelengths to create the false-colour images in this article. Several contrails are visible in satellite imagery of Russia and Belarus during the early stages of the invasion of Ukraine.

While civil aircraft produce linear contrails, military aircraft are much more likely to patrol a specific location. The racetrack patterns may indicate radar aircraft (refueling is typically done at lower altitudes where contrails are less likely to form).These contrails persist and are still visible (slightly distorted) in images from an hour later. 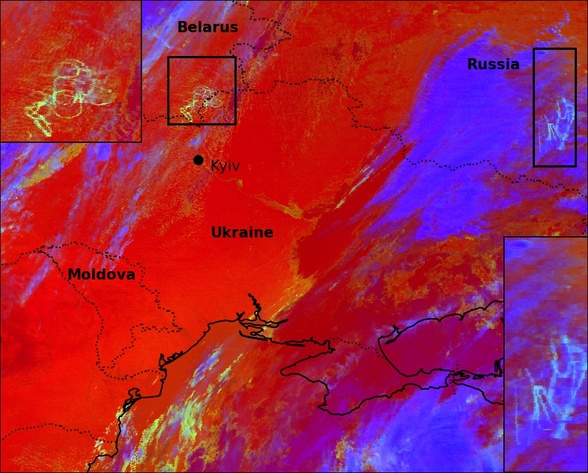 The original contrails are still visible, with new contrails being added in the same region.

The consistent, characteristic racetrack pattern of these contrails over time (particularly in the right-hand region) can be used to measure the lifecycle of contrails [6]. Here, we also see extra contrails added to these regions during the hour. Contrails form in regions of high relative humidity, so where one plane can form contrails, others will typically be able to as well.

It is not just orbiting aircraft that form contrails, a dogfight was reported south of Kyiv on Saturday morning. You can see evidence of it in this image, with circular contrail formations. 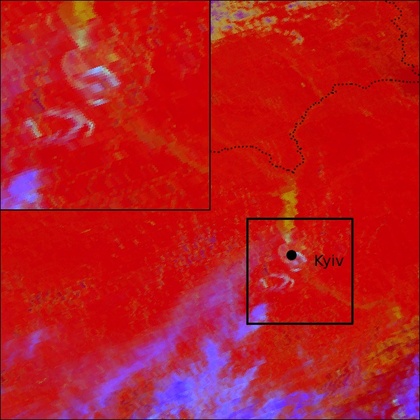 Contrails south of Kyiv, formed by a dogfight on Saturday morning.

It is not only Russian and Ukrainian aircraft that form contrails. Later on Saturday, a series on contrails formed over northern Romania. Although there are still civil aircraft flying in this region, the curved contrails here are characteristic of military aircraft and may be related to the refueling aircraft visible in the region. 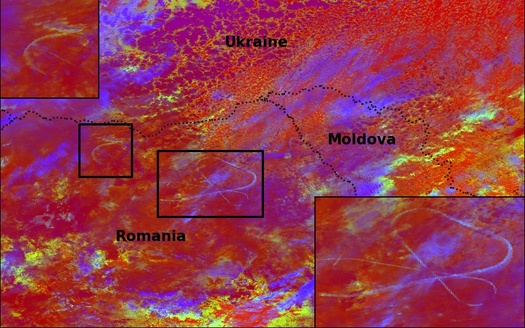 Contrails in northern Romania, likely formed by NATO aircraft related to the refueling aircraft in the region.