Much of the technology in Star Trek (transporters, warp speed and faster-than-light communication) is far ahead of our current scientific understanding. Even where our current knowledge conflicts with this future-tech, they can just add some new technology to fix the problem! [1]

This doesn't mean they ignore science though! Take the very first episode of Star Trek: Voyager. The USS Voyager has been transported to the other side of the galaxy. 70,000 light years from home (a long way, even if you can travel faster than light), they find a strange planet that is virtually a desert

Captain Janeway: It has all the basic characteristics of an M-class planet except there are no nucleogenic particles in the atmosphere. [2]

Lieutenant Tuvok: That would mean the planet is incapable of producing rain.

Now this is science we know something about - clouds! But is Tuvok right? 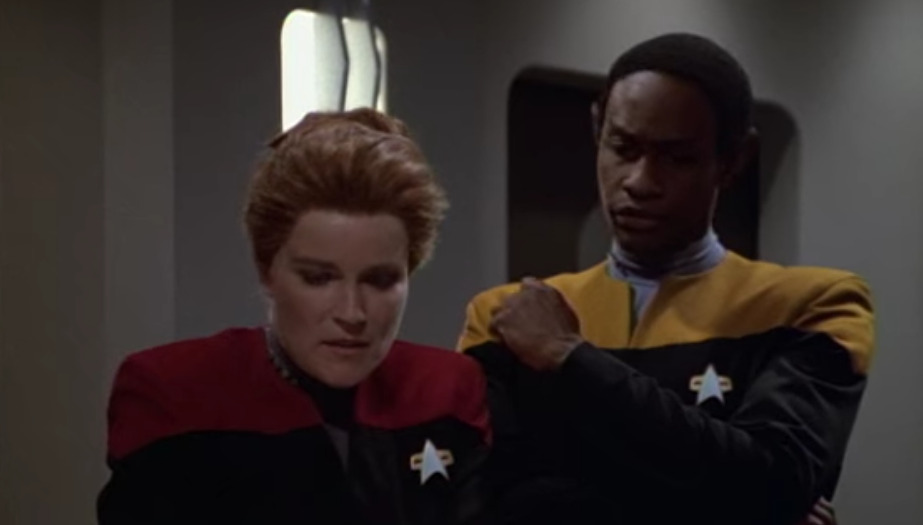 Captain Janeway and Lieutenant Tuvok have a serious conversation about clouds. Really!

Star Trek has a slightly loose relationship with scientific words. Nucleogenics is not a word used in cloud physics, but let's assume that a nucleogenic is anything capable of nucleating a cloud droplet [3]. We would call these aerosols. Tuvok suggests that without aerosol, this planet has no rain and hence no rivers, lakes or oceans.

Aerosol are required to form cloud droplets. To create a small cloud droplet, you need enough water molecules to collect together by chance to overcome the surface tension effect. This is very difficult without an aerosol particle, such that on Earth we find situations where there are too few aerosol to form a cloud

But what does this mean for rain?

Rain droplets are quite large. You might not have noticed this (you are also quite large), but a raindrop has more than 1020 water molecules in it. This is far too many to condense directly out of the atmosphere, so you need cloud droplets first [4]. Ultimately, this means that you need aerosol to form rain in almost all cases [5]. 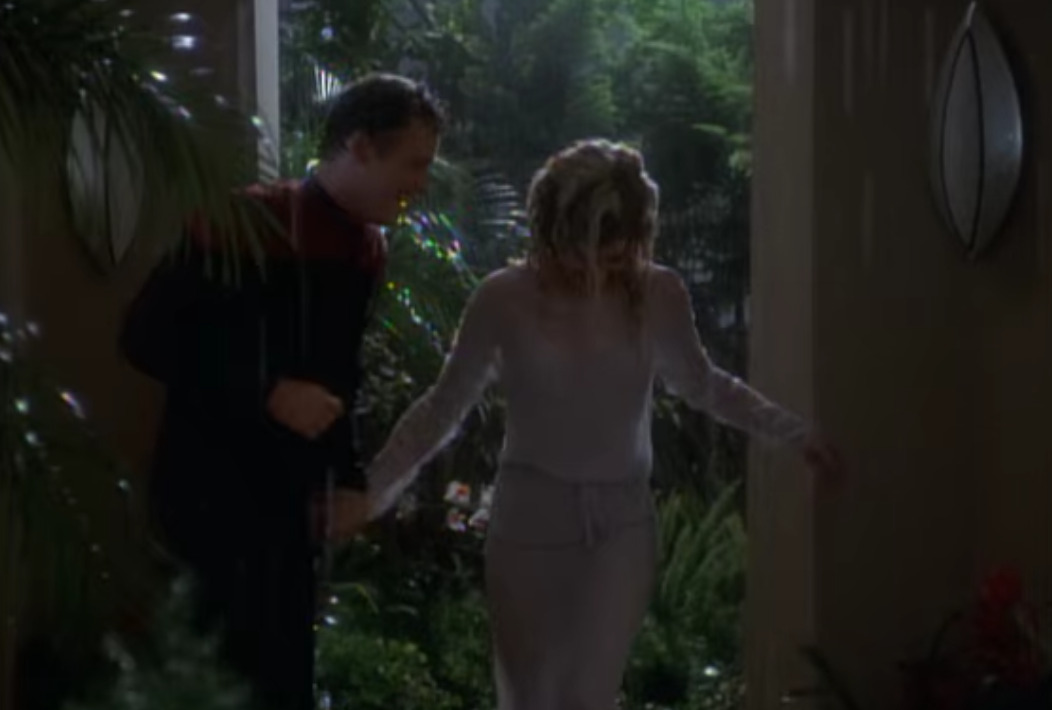 It never actually seems to rain in Star Trek (except on Earth and Ferenginar). There are lots of cases with some thunder and lightning, but actual water falling from the sky is very rare [6]. This is the best I could do for Voyager, and it isn't even real, it is a made-up memory! (VOY s01e08)

However, no rain doesn't mean no surface water! If there is no rain, the water would build up in the atmosphere and the humidity would increase until the water starts condensing on surfaces (instead of aerosols). You have seen this before - dew (or frost)!

Given that before it lost its aerosols, this planet at one point had enough water to sustain life (and form rain), this suggests that it should be possible to collect enough water from a solar still or other similar apparatus. I am not sure if this would be enough to form lakes or rivers though, we don't really have a good comparison on Earth [7].

Ultimately though, Tuvok is correct - if there are no aerosols, that stops rain from forming. However, for this planet, he is clearly wrong. There are two pieces of evidence that the atmosphere of this planet doesn't just have aerosols, it has a lot of them, easily enough to form rain.

The first clue comes in this image 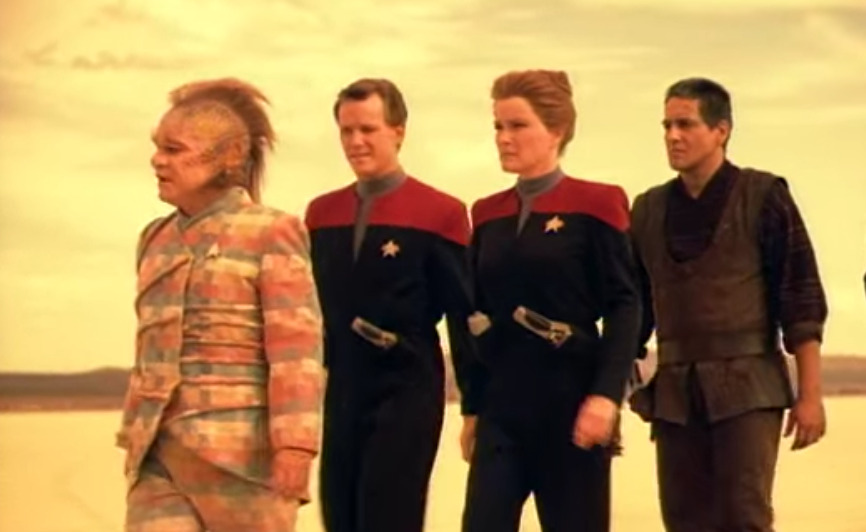 The away team on the planet, looking for aerosols?

Can you see it yet? Does this help? 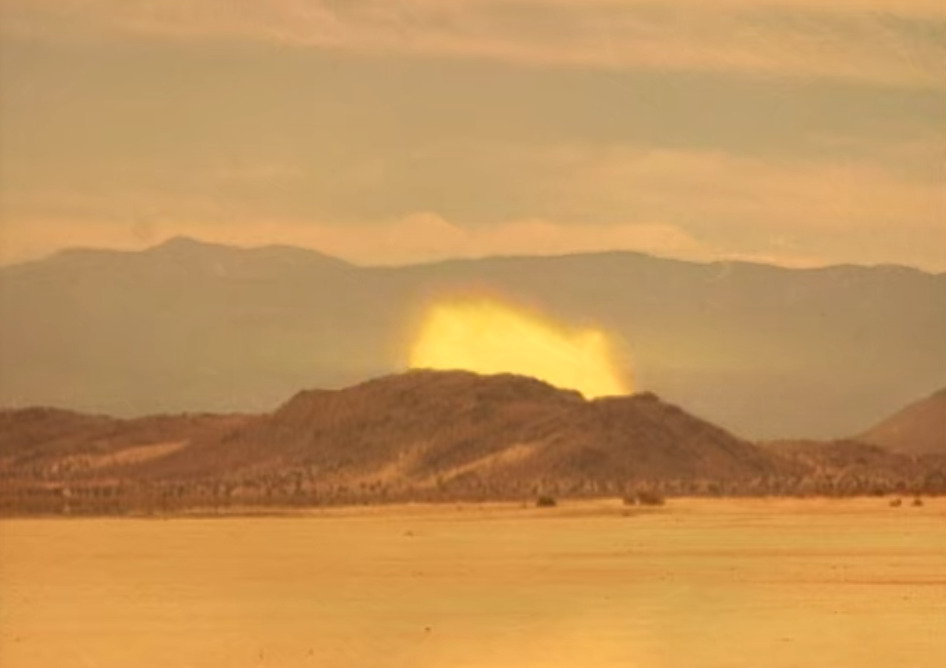 The explosion is not the clue

What about now? No, the explosion is not it. One last clue 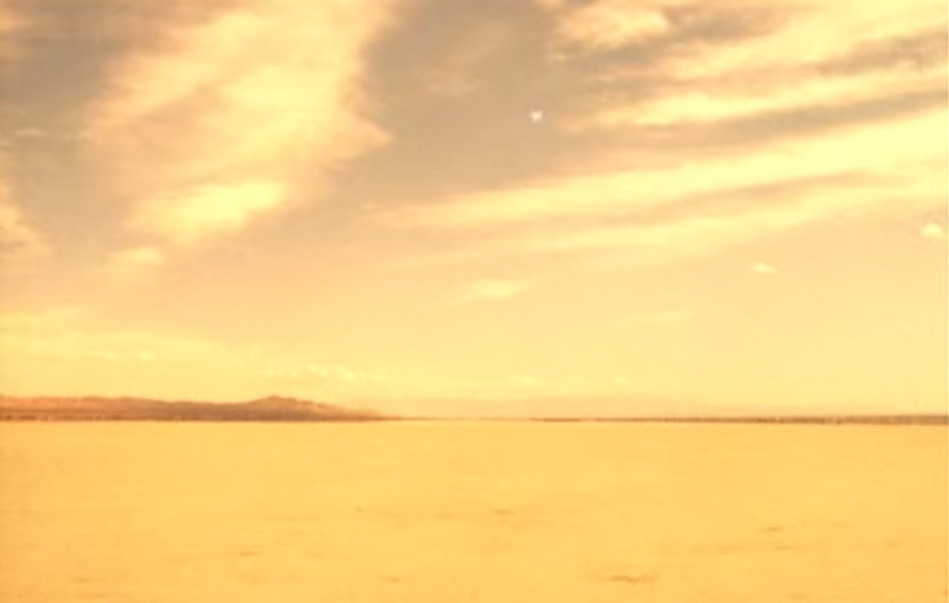 There are lots of clues here

There are clouds! Remember how we talked about how you can't form cloud droplets without aerosol? The existence of clouds is a great piece of evidence that aerosols exist on this planet (and so could not be the factor limiting the production of rain).

But okay, fair enough. They film this on Earth, finding somewhere without clouds is difficult. And they do try to hide the clouds with a yellow filter. There is some more evidence though.

This scene is very good evidence of aerosols on the planet. 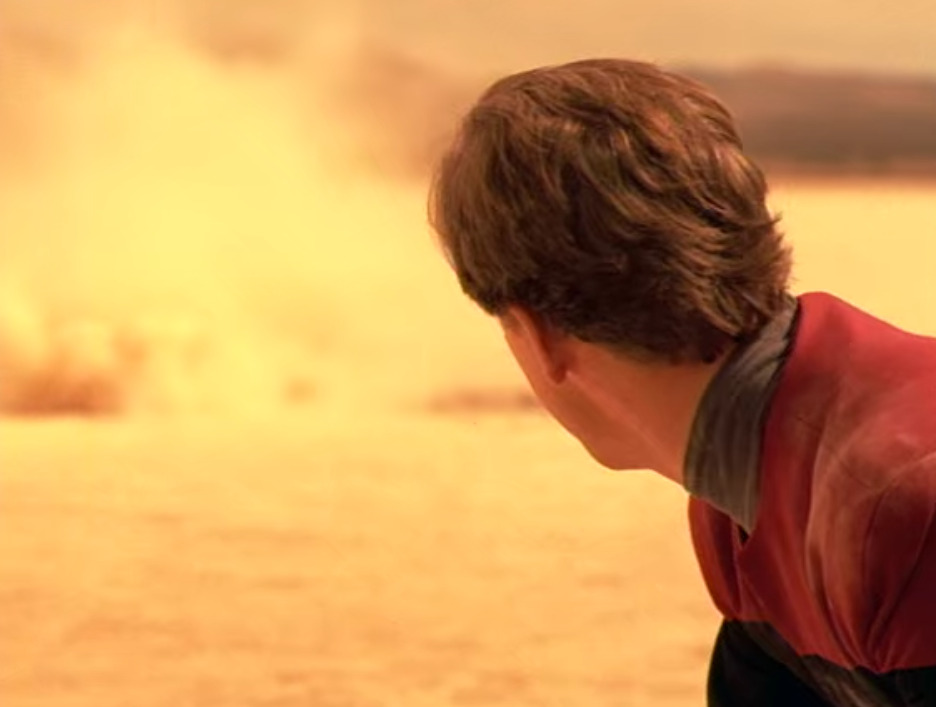 Here is a better view 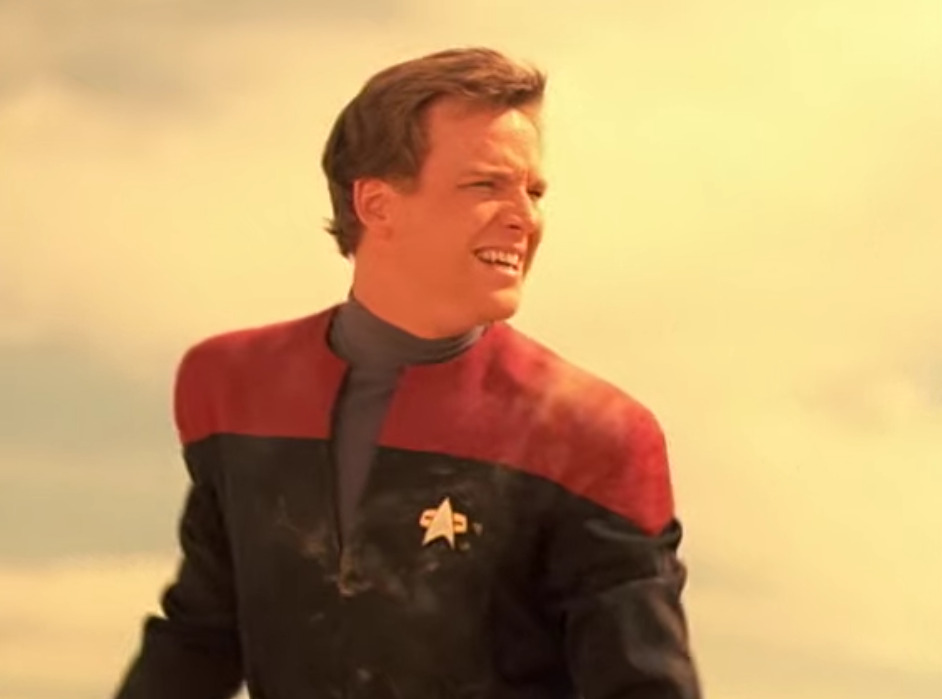 Tom is covered in dust, a type of aerosol! While desert dust is an aerosol, it is not normally the kind of aerosol that forms cloud droplets (as it doesn't play nicely with liquid water). However, that doesn't mean it can't. Mineral dust is very effective at forming ice crystals (which can then melt and form rain), and under some circumstances may be able to nucleate liquid droplets directly.

In our case, the dust on Tom's clothing is clear evidence of aerosols in the planets atmosphere (and could be done correctly, even when filming on Earth). Perhaps Tuvok's sensors were malfunctioning?

Includes the science, but a bit hazy on the details of how it all works 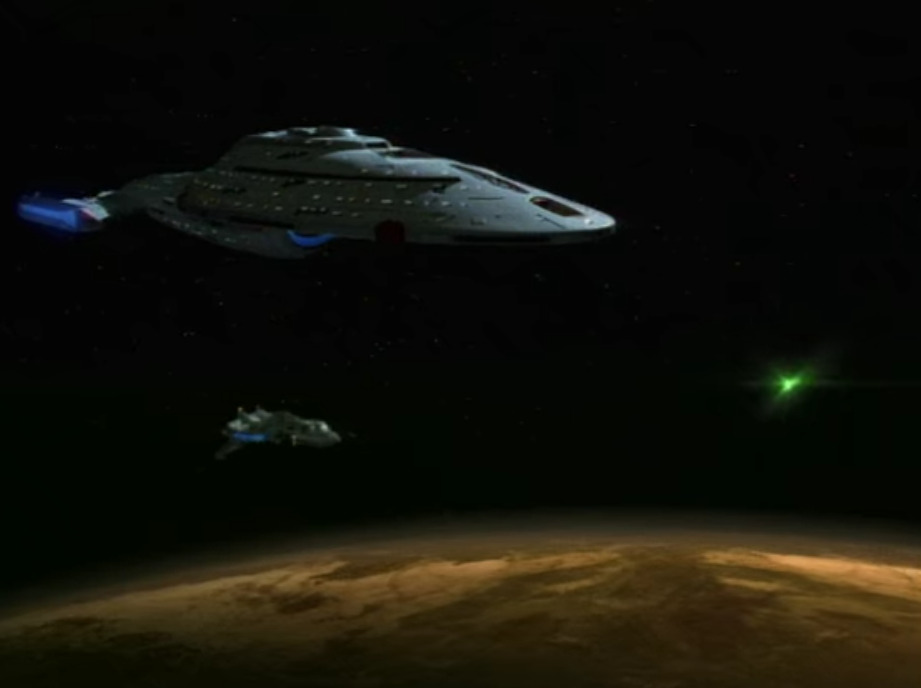 Maybe a photon torpedo would help to seed some clouds? I think we have a few hundred spare down the back of the sofa.